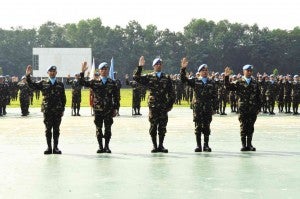 Officers and men of the 7th Philippine peacekeeping force bound for Golan Heights during their sendoff ceremony at Army headquarters in Manila.  AFP FILE PHOTO

MANILA, Philippines—The Filipino peacekeepers deployed in the Golan Heights are set to arrive in the Philippines Friday afternoon.

Lieutenant Colonel Ramon Zagala, public affairs chief of the Armed Forces of the Philippines (AFP), said the Filipino troops would arrive 5:00 p.m. at the Villamor Airbase in Pasay City.

“The first batch of 244 peacekeepers is expected to arrive today, September 19 while the remaining 85 will arrive on Sunday, September 21,” Zagala said in a statement.

The Filipino soldiers were supposed to come home this October but would arrive earlier than expected.

“Due to the escalating violence in the Syrian side of Golan Heights, all peacekeepers were repositioned in the Israeli-side of the mission area. Because of this repositioning, Undof (United Nations Disengagement Observance Force) deemed it practical that the Philippine contingent be repatriated earlier than expected,” Zagala said.

He said the AFP would honor, through a “heroes’ welcome” with their families, the peacekeepers who exhibited courage, bravery and commitment, while in the face of overwhelming threat.

In August, the Filipino peacekeepers were locked in a standoff with Syrian rebels in Golan Heights.