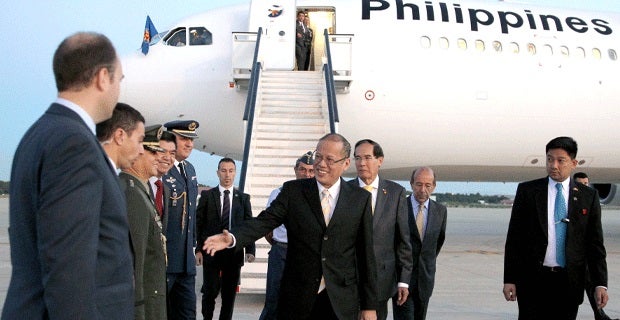 MADRID—President Benigno Aquino III brought to Spain’s attention Monday (Sept. 15) the “increasing pattern of aggressive Chinese behavior” in the South China Sea, calling on Europe to back a Philippine proposal to settle the dispute.

In a bilateral meeting with Prime Minister Mariano Rajoy, Aquino cited the presence of Chinese vessels in the Philippines’ 370-kilometer exclusive economic zone and the “harassement of fishermen” from neighboring countries also claiming portions of the disputed waters.

With a poorly equipped Coast Guard watching over a coastline of more than 36,000 km, the Philippines has found it increasingly difficult to guard against intrusions, particularly from Beijing, which is claiming around 90 percent of the South China Sea.

Aquino sought Spain’s support behind Manila’s proposed Triple Action Plan, which he described as a “positive, constructive, and comprehensive approach to the peaceful settlement of disputes in the South China Sea.”

The plan provides “immediate, intermediate, and final approaches to address the provocative and destabilizing activities in the region without prejudice to existing territorial claims.”

“The Philippines hopes that the claimant states, other ASEAN (Association of Southeast Asian Nations)countries, and the ASEAN dialogue partners, will favorably consider this proposal,” Mr. Aquino said.

Under the plan, Manila wants countries to refraim from activities that could increase tension in the South China Sea.

“The call for a cessation of activities is not intended to affect the various claims of different countries,” Aquino said.

“It is intended as an imperative arrangement in light of the escalating tensions in the South China Sea. All countries should be able to support this imperative for the sake of peace and stability. How this proposal would be shaped must be the subject of dialogue among countries concerned.”

The second step under the Philippine proposal is the completion of a binding Code of Conduct in the region. Disputes should ultimately be settled under a mechanism “anchored on international law.”

“The Philippines is pursuing such a resolution through Arbitration and believes that the Arbitration award will clarify the maritime entitlements for all parties, which will be the basis for the settlement of maritime disputes,” the President said.

After the bilateral meeting with Rajoy, the President motored to Palacio de la Zarzuela for an audience with King Felipe VI.

Aquino and members of his delegation were scheduled to fly to Brussels for a more grueling schedule that included a meeting and joint press conference with European Commission President José Manuel Barroso at 9 p.m. (Manila time).

Like in Spain, the President was to assure the European Council that the Philippines was committed to  rooting out illegal, unreported, and unregulated fishing.

“We are now working towards legal and administrative reforms to address the European Union’s concerns on the regulation of the Philippines’ fishery sector,” he had told Rajoy.

Aquino also assured Europe that the Philippines’ “maritime education and training institutions remain compliant with international standards and continue to produce seafarers that are globally competitive.”

The President took the opportunity to thank Rajoy for Spain’s assistance to victims of Supertyphoon “Yolanda” (international name: Haiyan) earthquakes in Bohol and Cebu, and Zamboanga siege, which all happened last year.

Aquino also apprised Rajoy of the ongoing peace efforts with the Moro Islamic Liberation Front and asked Spain to “continue to be our partner in the development of Mindanao.”

Aquino: It’s more fun to do business in the Philippines

Read Next
Aquino: It’s more fun to do business in the Philippines
EDITORS' PICK
Cherry Mobile teams up with Cloud Panda PH, launches online store
PNP charges 301 village execs for corruption in SAP cash aid payouts — DILG
Recall of VFA abrogation won’t affect senators’ petition at SC — Drilon
‘I am a natural-born Filipino’ — Gabby Lopez
Leveling up your ‘lutong bahay’ with the kitchen companion you never knew you needed
ABS-CBN’s Gabby Lopez attends House franchise hearing
MOST READ
MMDA to sue, slap P1,000 fine on bike group
MMDA: Commuters to blame for chaos
‘I am a natural-born Filipino’ — Gabby Lopez
Calida ‘just the lawyer, not the client’ and must ‘never lose his cool’ – Macalintal
Don't miss out on the latest news and information.