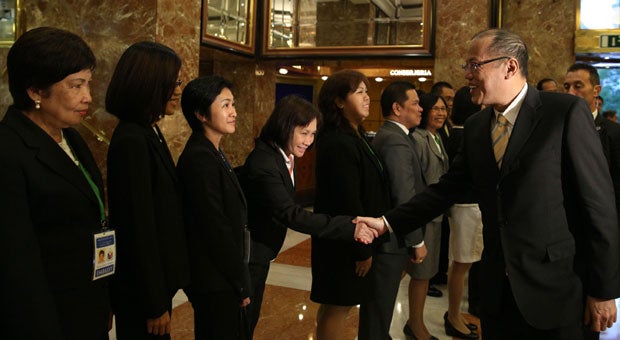 MADRID, Spain—President Aquino arrived here on Sunday to kick off his trip to Europe and the United States, presenting himself as a bearer of “good news” about the Philippines and promising a “long list” of benefits when he returns home in two weeks.

Aquino will have 86 engagements in Spain, Belgium, France, Germany and the US, including an audience with King Felipe VI of Spain and a meeting with Spanish Prime Minister Mariano Rajoy on Monday morning.

In the US, he will visit Boston and attend the UN Climate Change Summit in New York.

“Our trip will be long… but we’re certain that we will bring home a long list of good news for our country, our ‘bosses,’ our beloved people,” Aquino said.

One such news is Europe’s support for the Philippines in its territorial dispute with China in the West Philippine Sea.

The Philippines is rallying support for its “triple action plan” to resolve disputes through international arbitration, an idea spurned by China.

Under the plan, Manila wants claimant countries to avoid activities that would raise tensions. The plan calls for a binding code of conduct in the disputed areas.

He also offered a wreath at the monument to Jose Rizal at Avenida Islas Filipinas and Calle Santader—a replica of the monument in Manila’s Rizal Park.

In a trip for which the government is spending P31.9 million, Aquino is confident of reaping returns in the form of fresh investments.

As one of Asia’s fastest-growing economies, the Philippines offers European businessmen good investment opportunities, which Aquino attributes to the “transformation we are now enjoying.”

“We intend to enhance their level of confidence in our country,” Aquino said in Manila before leaving for Madrid. “We will share with them how a country that was once left behind is now recognized [by its peers], how, through good governance, our economy has improved.”

Aquino is to meet with executives of seven companies in Spain.

Aquino will have a chance to thank King Felipe VI and Prime Minister Rajoy for Spain’s assistance to victims of Super Typhoon “Yolanda” (international name: Haiyan), which ravaged the Visayas last year.

Salinas recalled getting handwritten letters from ordinary Spaniards offering as little as 20 euros (P1,140) for the typhoon victims.

“I am not a rich man but I would like to help,” Salinas quoted one letter as saying.

The President is to also meet with the Filipino community at Colegio Nuestra Señora de las Maravillas.

Leaving Manila, Aquino said he would use the meetings to “report the good news that our country has been getting left and right.”

“It is our hope that when I return to the country, they themselves will say, ‘The Philippines is really different now. I can now fulfill my dreams and build a future for my family in our own country,’” he said.

Aquino will present to European leaders steps the Philippines has taken to “ensure that our seafarers are being trained” in line with the 1978 convention on training, certification and watchkeeping.

He will also assure European officials that “we are one with them in eliminating” illegal and unregulated fishing.

Read Next
Canadian Islamist preacher deported from PH
EDITORS' PICK
Is your company a growth champion? Stand up and be recognized!
New Year, New Rediscoveries
More than 150 National Guard in Washington for Biden inauguration test positive for coronavirus
PNP’s Covid-19 cases jump to 9,809; 52 new infections logged
Pope Francis to miss events due to new flare up of leg pain—Vatican
Acer Philippines welcomes you to its first flagship store
MOST READ
Why Kris Aquino sleeps with her pearls
Parlade targets universities after fiasco with beauties
AFP to apologize to UP alum falsely included in list of NPA members — Lorenzana
Dustin Poirier knocks out Conor McGregor at UFC 257
Don't miss out on the latest news and information.