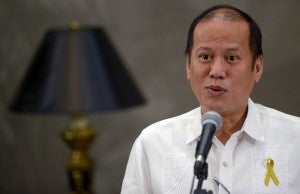 MADRID—In what will be his second trip to Europe since assuming office in 2010, President Aquino embarks on a grueling four-nation visit to Spain, Belgium, France and Germany with the Philippines’ territorial dispute with China high on the agenda.

The President, who left Manila at 9:50 p.m.  Saturday, will attempt to rally more support behind his government’s proposed “triple action plan” to resolve the South China Sea dispute through international arbitration.

The President will sit down with King Felipe VI of Spain and Prime Minister Mariano Rajoy here on Monday. In Brussels, Mr. Aquino will have an audience with King Philippe of Belgium and separate meetings with European Commission President Jóse Manuel Barroso and European Council President Herman van Rompuy.

Mr. Aquino wraps up his weeklong European sojourn on Sept. 19 and 20 in Germany where he will meet with Chancellor Angela Merkel and Federal President Joachim Gauck.

After that, he will fly to the United States.

During the President’s two-week absence, Executive Secretary Paquito Ochoa has been assigned to manage the day-to-day affairs of the Office of the President, said deputy presidential spokesperson Abigail Valte.

But it will be Vice President Jejomar Binay who will represent the President in his official ceremonial duties and chair a Cabinet meeting, should one be convened while Mr. Aquino is away, Valte said.

This arrangement is in accordance with the memorandum that the President issued in 2010 when he went to the United States on an official trip, Valte told state-run Radyo ng Bayan.

“The memorandum that was issued by the President from August of 2010 still stands. The Vice President will chair a Cabinet meeting, but it is the Executive Secretary who will convene it, in case it is necessary,” she said.

But with today’s advanced technology, the President could actually manage the government’s day-to-day affairs even if he is out of the country, Valte pointed out.

“We are always in contact with him. So the Executive Secretary is the one tasked by the President to run the affairs of the Office of the President,” Valte said.

For the visit, the President brings with him the prospect of lasting peace and stability in Mindanao following the signing of the Comprehensive Agreement on the Bangsamoro with the separatist Moro Islamic Liberation Front last March.

Mr. Aquino said in a speech at the turnover ceremonies in Malacañang that he would “proudly share” the drafting of the Bangsamoro Basic Law and “the rest of our achievements in the area of peace” with the European leaders.

The President will also seek the European leaders’ support for the Philippines’ application in the Generalized System of Preferences Plus (GSP+), a system of preferential trading agreement.

Once the Philippines is admitted, Assistant Foreign Secretary Zeneida Angara-Collinson said it could avail of zero tariffs for more than 6,000 export products.

In Madrid where he is set to arrive at 7:30 a.m. Sunday, the President will meet with former Spanish Prime Minister Jose Maria Aznar in the afternoon.

Mr. Aquino will lay a wreath at the monument to Jose Rizal, a replica of the one in Manila.

The President will spend most of the day meeting with Spanish investors. He also allotted an hour for  members of the Filipino community at the Colegio Nuestra Señora de las Maravillas.

Mr. Aquino will fly before noon to Brussels where a more backbreaking schedule awaits him and his delegation.

From Europe, the President will fly to the United States, heading first to Boston, Massachusetts, where he is scheduled to deliver a speech at the Kennedy School of Government at Harvard University.

His Boston trip will include a personal visit to the house on Commonwealth Avenue near Boston College, where he lived for three years with his parents, Ninoy and Cory, and his four sisters during the family’s martial law exile.

Speech at UN on climate

In New York City, the President will deliver a speech at the United Nations Climate Change Summit on Sept. 23.

Mr. Aquino is one of the world leaders who are expected to give a push for an acceptable international agreement on the reduction of greenhouse gas emissions in the 2015 Paris Climate Change Conference.

The President was personally invited by UN Secretary General Ban Ki Moon and US President Barack Obama to attend the climate change summit in New York, in light of the Philippines’ experience with Supertyphoon “Yolanda” (international name: Haiyan) in November 2013. With a report from Nikko Dizon