GOLAN HEIGHTS–Al-Qaeda linked rebels in Syria on Thursday released a group of 45 Fijian UN peacekeepers they kidnapped two weeks ago in the Golan Heights, a UN spokesperson said.

The peacekeepers, who were snatched from Quneitra on the Syrian side of the strategic plateau on Aug. 28, were released unharmed and said to be in “good condition,” the spokesperson said.

The Fijians were part of the United Nations Disengagement Observer Force (UNDOF), tasked with monitoring a 1974 ceasefire agreement between Israel and Syria on the Golan Heights.

“Today at 2:30 p.m. local time, the 45 Fijian peacekeepers who had been detained were handed to UNDOF,” the spokesperson said.

“All the 45 peacekeepers are in good condition,” he added, saying they would undergo medical checkups.

“We opened the gate for them, they are in Israel,” she said.

An AFP correspondent at the scene said they were being taken in UN vehicles to a UN base on the Israeli side.

But shortly after they returned to Syrian territory through a different crossing point, a military spokeswoman told AFP, without explaining why.

The UN spokesperson said on Twitter that they were headed to Camp Fawwar on the Syrian side of the border for medical treatment.

The Fijians were captured on Aug. 28 by fighters from the Al-Nusra Front after they seized control of the Quneitra crossing following a battle with troops loyal to Syrian President Bashar al-Assad.

The peacekeepers were forced to surrender their weapons and taken hostage.

A second group of 81 Filipinos, who were surrounded by rebel forces, held their ground and refused to lay down their weapons, later managing to escape.

Quneitra is the only formal crossing point between the Syrian and the Israeli-controlled side of the Golan Heights.

The capture of the peacekeepers triggered a sharp condemnation from the UN Security Council, which demanded their “unconditional and immediate release”.

UNDOF has played a key role in monitoring the peace between Damascus and Israel over the past four decades. 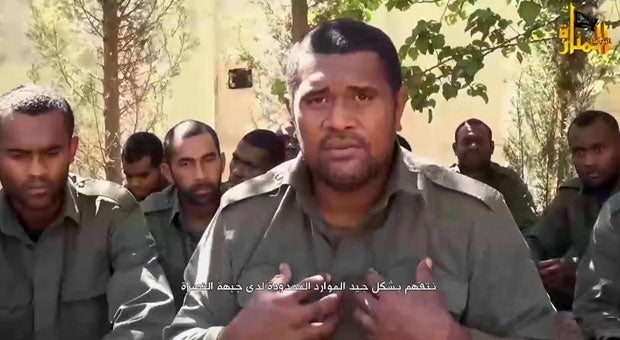 This image made from video posted on a militant social media account on Thursday, Sept. 11, 2014, shows UN peacekeepers from Fiji held captive by militants from the Nusra Front in Syria. The 45 Fijian peacekeepers were released Thursday two weeks after they were kidnapped in the Golan Golan Heights, a UN spokesperson said. AP PHOTO VIA MILITANT SOCIAL MEDIA ACCOUNT

Israel, technically still at war with Syria, seized 1,200 square kilometers (460 square miles) of the Golan Heights during the 1967 Six-Day War and later annexed it in a move never recognized by the international community.

Six countries contribute troops to the 1,200-strong UN force on the Golan, including Fiji, India, Ireland, Nepal, The Netherlands and The Philippines.

UN peacekeepers on the Golan Heights were detained twice last year, but all of them were eventually released safely.

Some 21 Filipino peacekeepers were abducted by Syrian rebels for five days in March 2013, and another four were captured by the same group in May, raising fears over the growing number of incidents targeting UN forces on the plateau.

In a video released late Wednesday, Al-Nusra said it was going to free the Fijian peacekeepers, dropping earlier demands for the delivery of aid to areas besieged by the Syrian government, a prisoner release and the group’s removal from a UN terror blacklist.

The video also featured an unidentified Fijian peacekeeper who confirmed the group had pledged to free the soldiers.

“We have been informed that we will be released soon and we are all very happy to be going home,” he said.

The peacekeeper thanked Al-Nusra “for keeping us safe and keeping us alive.”

“I would like to assure you that we have not been harmed in any way,” he said.–Jalaa Marey