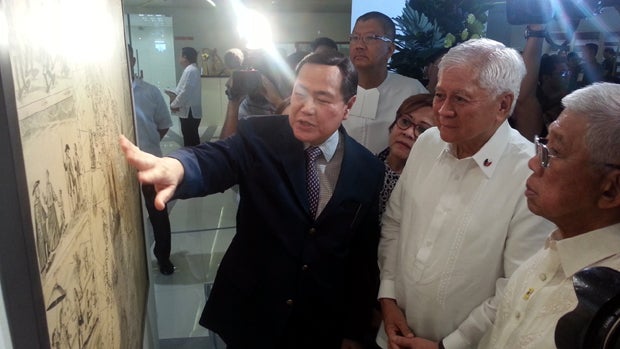 MANILA, Philippines – An exhibit of 60 ancient maps presented Thursday showed that China has never had “historical ownership” of Scarborough Shoal, one of the many maritime features in the disputed West Philippine Sea.

The maps were published based on the previous lecture of Supreme Court Senior Associate Justice Antonio Carpio debunking China’s claims of “indisputable sovereignty” over the entire South China Sea.

He said that the maps corroborate the fact that Scarborough, also known as Bajo de Masinloc or Panatag shoal, has never been a part of Chinese territory and has always been part of the Philippines.

Carpio said in his keynote speech that he hopes these maps, the oldest of which date back to 1136 under China’s Nan Song Dynasty, would show to the world the true historical facts of the disputes in the South China Sea.

All maps, whether published by China or other countries, consistently show that China’s southernmost province in Hainan island does not claim any other maritime features, such as the Spratly Islands and Scarborough.

Maps showing the Philippines on the other hand show Scarborough as part of the country whether it was named or unnamed.

Scarborough was taken over by China after a tense standoff with Philippine maritime authorities that began in April 2012 with the discovery of Chinese fishermen poaching in the shoal.

Philippines has since filed an arbitration case before the International Tribunal on the law of the Sea (Itlos), challenging China’s nine-dash line claim over nearly 90 percent of the South China Sea.

China has refused to participate in the proceeding insisting bilateral talks on the basis of their “indisputable sovereignty” and on “historical facts.”

Carpio, however, clarified that ancient maps are not material to the case pending before the Itlos.

The maps are part of Carpio’s personal collection and will be on exhibit until September 26, after which the exhibit will be brought to the University of the Philippines and Ateneo.

All the exhibited maps have been uploaded on the website of the Institute for Maritime and Ocean Affairs atwww.imoa.ph.