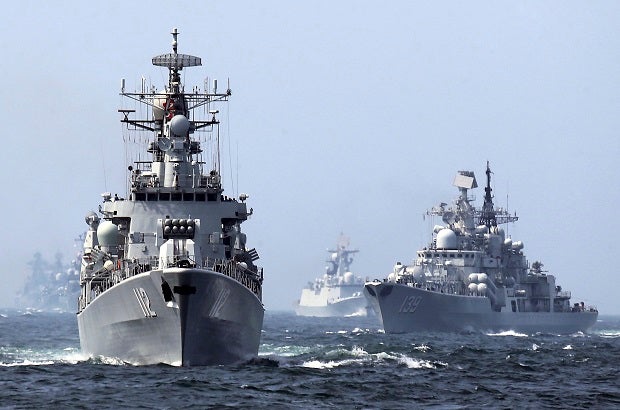 In this May 24, 2014 photo, China’s Harbin (112) guided missile destroyer, left, and DDG-139 Ningbo Sovremenny class Type-956EM destroyer, right, take part in a week-long China-Russia “Joint Sea-2014” navy exercise at the East China Sea off Shanghai, China. Several Asian nations are arming up, their wary eyes fixed squarely on one country: a resurgent China thats boldly asserting its territorial claims all along the East Asian coast. The scramble to spend more defense dollars comes amid spats with China over contested reefs and waters. Other Asian countries such as India and South Korea are quickly modernizing their forces, although their disputes with China have stayed largely at the diplomatic level. AP

BEIJING— Vietnam has nearly doubled its military spending, Japan is requesting its biggest-ever defense budget and the Philippines is rushing to piece together a viable navy.

Several Asian nations are arming up, their wary eyes fixed squarely on one country: a resurgent China that’s boldly asserting its territorial claims all along the East Asian coast.

The scramble to spend more defense dollars comes amid spats with China over contested reefs and waters. Other Asian countries such as India and South Korea are quickly modernizing their forces, although their disputes with China have stayed largely at the diplomatic level.

Asian countries now account for about half of the world’s arms imports, with China leading the way by quadrupling its annual military budget over the past decade. The growth in military spending has largely kept pace with economic expansion, although it’s been pulling ahead in China, Vietnam and several other countries this year.

China’s goal is to dislodge the US as the dominant power in the Pacific, said Robert D. Kaplan, chief geopolitical analyst for the US-based intelligence research firm Stratfor. Among the stakes are vital shipping lanes in the South China Sea and potentially lucrative pockets of oil and natural gas under East Asian waters.

“The Chinese bet is that it can increase its military capacity in the South and East China seas faster than Vietnam and the Philippines can do so,” Kaplan said. “If China is able to move freely and exercise more control of its adjacent seas, it will become a full-fledged naval power.”

Beijing hasn’t yet caught up to the US, which at $665 billion a year, spends more on its military than the next eight countries combined and triple that of China, according to the Stockholm International Peace Institute, a think tank. Still, China’s spending nearly equals the total defense budgets of all 24 other countries in East and South Asia.

Drawing the most attention is China’s submarine fleet, which is projected to match US numbers by 2020, at 78 vessels each. Many of the Chinese submarines will be stationed at a giant underwater base on Hainan island, which juts into the South China Sea.

China’s moves have spurred a submarine shopping spree across Asia. This year, Vietnam received the third of six submarines it ordered from Russia plus maritime patrol aircraft capable of hunting down Chinese subs. Russia is the top military exporter to Asia, followed by the US and then European countries such as the Netherlands.

Over the summer, Vietnamese and Chinese ships rammed each other repeatedly after China moved an oil rig into waters claimed by both countries. Vietnam’s military spending expanded by 83 percent over the past five years, making up 8 percent of government spending.

“Submarines are seen as a potential for an underdog to cope with a large adversary,” said Siemon Wezeman, a senior researcher at the Stockholm institute. “They can move silently and deny aerial or maritime control.”

Compared to Vietnam and Japan, the Philippines is lagging behind. After helplessly watching China build atop reefs in the Spratly Islands, which both countries claim, the Philippines welcomed US troops back to its bases after 20 years away. And it plans to boost spending on maritime patrol aircraft, bombers and other hardware.

“The Philippines is doing a lot of work to invest in military modernization,” said Jon Grevatt, Asia Pacific defense analyst at the research group IHS Jane’s. “For many years its economy has been growing and for many years it hasn’t been able to respond to these requirements.”

Even in southern Asia, where China has taken a relatively hands-off approach, India has bought so many tanks and jet fighters that it’s become the biggest arms importer in the world. India has also opened a 100,000-person-strong mountain corps near disputed stretches of its border with China.

Despite the focus on marquee hardware, much of the action so far has involved Coast Guard ships that can easily jockey for control of disputed islands and fishing waters.

In June, Japan agreed to donate six Coast Guard vessels to Vietnam, after pledging 10 to the Philippines last year. On its own, Vietnam has nearly doubled its Coast Guard fleet to 68 vessels over the past five years, according to the UK based International Institute for Strategic Studies. And Japan has expanded its main Coast Guard fleet by 41 vessels, for a total of 389 ships.

Japan has used such vessels over the past two years to defend its claims to several uninhabited islands it calls the Senkakus, which the Chinese claim as the Diaoyus.

“Given that all the countries are trying to avoid outright military conflagration, they’ve been keeping things at the level of paramilitary forces,” said Sam Perlo-Freeman, head of the military expenditure program at the Stockholm institute. “They’re trying to establish some sort of armed presence without ramping things up to a much more dangerous level.”

Japan, however, appears to be preparing itself for possible escalation.

In July, Abe’s Cabinet approved a reinterpretation of the country’s constitution allowing it to defend American and other foreign troops under attack. Earlier this month, Japan and India pledged to share defense technologies and hold joint military exercises.

“If China is being more bellicose, it’s because they see winds of opportunity,” said Bernard Loo Fook Weng, a military studies expert at the S. Rajaratnam School of International Studies in Singapore. “This may all step toward a more violent situation.”