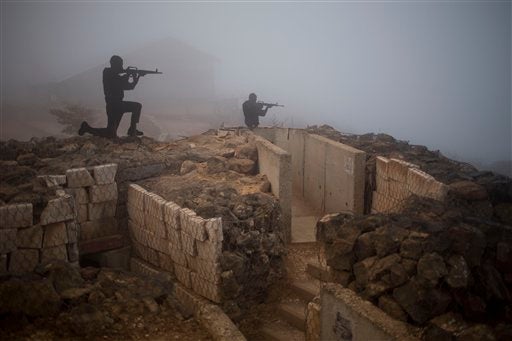 Metal boards in the shape of gunmen sit on an old bunker at an observation point on Mt. Bental in the Israeli controlled Golan Heights, overlooking the border with Syria near the Quneitra province, Aug. 29, 2014. A Filipino lawmaker on Wednesday, Sept. 3, broached the idea of making a movie about the “great escape” of Filipino peacekeepers from a standoff with Syrian rebels on the Golan Heights that started Aug. 28. AP PHOTO/ARIEL SCHALIT

MANILA, Philippines–Awed by their daring feat, a lawmaker on Wednesday broached the idea of making a movie about the “great escape” of Filipino peacekeepers from a standoff with Syrian rebels on the Golan Heights.

As several other lawmakers heaped praises on them, a senator recommended the promotion of the 40 peacekeepers to Armed Forces Chief of Staff Gen. Gregorio Pio Catapang Jr.

Catapang appeared before the Commission on Appointments, which later approved his ad interim appointment to the grade of general and chief of staff of the AFP.

“That’s a very good escape. We have to make a movie out of that escape. I’m not kidding,” Negros Oriental Rep. George Arnaiz suggested as his colleagues congratulated the Army soldiers for slipping past the Syrian rebels who had encircled them.

A colleague chimed in: “May I get the rights to that movie?”

Catapang said the Filipino commander hatched a plan to escape under cover of darkness, and it helped a great deal that the rebels were sleeping.

“They didn’t surrender because we owned their firearms,” he said, drawing chuckles from the lawmakers.

The Filipino peacekeepers escaped in the dark at Sunday midnight, Syrian time, slipping past the sleeping 100 Syrian rebels who had encircled the troops’ encampments at Position 68 and 69.

The military top brass—including Catapang who kept tabs on the escape with Defense Secretary Voltaire Gazmin and Foreign Secretary Albert del Rosario in Camp Aguinaldo—hailed it as the “greatest escape.”

Without any opposition to Catapang’s appointment, the lawmakers focused on the feat of the peacekeepers, and congratulated the AFP chief for his decisiveness in handling the “Golan Heights” crisis.

Catapang said the escape had been much tougher than reported because the peacekeepers not only had to dodge bullets, but mines in their escape.

“It was the greatest escape of their lives. When they had their 2.2-kilometer run, they had to pass through mines because the Golan Heights, [whenever] there was a war, there were many mines …. That was another problem they had to face,” he said. “It was really a very tough decision.”

After learning that the rebels slept at night, the peacekeepers hatched a plan to escape around midnight ahead of an attack by a larger number of rebels the next day, Catapang said. “They sleep at nighttime, not like our guards; we do not sleep,” he said.

The plan was coordinated with the AFP top brass and was eventually approved by Gazmin, Catapang said.

It was Capt. Nilo Ramones, head of the peacekeeping force at Position 68, who drew up the plan, according to the AFP chief.

It was at this point that Arnaiz suggested that a movie be made on this escape. After the hearing, he said he wanted a film to capture that moment of escape, and how the soldiers felt at the time.

“It was a thrilling escape. Within the number of hours that they were surrounded, how did they feel? How did their families back home feel? It would make a good movie,” he said in an interview.

Cagayan Rep. Rufus Rodriguez said he would file a resolution to congratulate Catapang for a “job well done.”

“I’m sure that the general was on top of the situation every moment … and the fact they fought, they did not surrender, and was able to withdraw honorably and without any casualty, will indeed show to the country that General Catapang has indeed been the leader of the Armed Forces of the Philippines by doing all these moves,” he said.

“The world saw the Filipino flag at its highest,” he added. “While another force surrendered, the Philippine contingent never surrendered.”

Along the same line, Sen. Antonio Trillanes IV proposed that the peacekeepers be recommended for promotion.

“That would be a fitting reward for the gallantry in action that they have demonstrated,” the senator said. “In the Senate, we will give a similar honor for the … peacekeepers.”

Catapang said this was possible.

Rodriguez said he would also file another resolution requesting the Department of Foreign Affairs to follow up the possibility of increasing the forces, including the Philippine contingent, on the Golan Heights.

“The United Nations cannot afford to withdraw, they should advance,” he said.