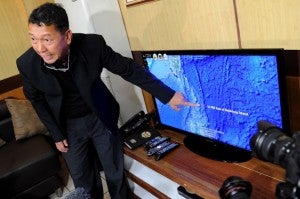 Philippine Bureau of Fisheries and Aquatic Resources director Asis Perez points to a map in Manila on May 10, 2013, showing where a Philippine fisheries patrol vessel manned by the coast guard shot at a Taiwanese fishing vessel the day before near Balintang island in the northern Philippines.  INQUIRER FILE PHOTO

MANILA, Philippines –The Philippine Coast Guard personnel charged with the death of a Taiwanese fisherman last year asked the Batanes regional trial court to dismiss the homicide case against them.

They were accused of killing Hong Shi Cheng after a sea chase and confrontation off the coast of Balintang Channel in northern Luzon on May 9 last year.

The accused said the prosecution could not prove that homicide took place since they did not attach any certificate of death, autopsy report, or any similar document or evidence which would establish Hong’s death.

They added that even the resolution of the panel of prosecutors headed by Assistant State Prosecutor Juan Pedro Navera admitted it has no proof of Hong’s death, adding that the only proof of death of the Taiwanese national was what was conveyed to Dr. Ruperto Sombillon, the medico-legal officer of the National Bureau of Investigation by Taiwanese authorities when the NBI team headed to Taiwan in the aftermath of the incident for a joint investigation.

“Indeed, Dr. Sombillon admitted in his 09 September 2013 affidavit filed during the preliminary investigation of the case that he never saw Hong’s remains, and did not conduct an autopsy on the latter and as such has no personal knowledge that he is actually dead,” the accused said through their counsel, Rodrigo Moreno.

They said even if Dr. Sombillon was shown a video/Power Point presentation detailing the internal and external injuries of the victim as well as photos of the autopsy, his statements regarding Hong’s death were hearsay and would not stand in court since he has no personal knowledge of the victim’s death.

Under Rule 130, Section 36 of the Rules of Criminal Procedure, the accused said witness can testify only to those facts which he knows of his own personal knowledge or which are derived from his own perception, otherwise such testimony would be hearsay.

Likewise, the accused said public knowledge about the incident and the extensive media coverage did not constitute evidence to show that Hong was indeed dead since it also constituted hearsay evidence.

“Clearly, there is no proof whatsoever of the corpus delicti of the crime of homicide, namely the fact of death of the alleged victim. Hence, accused cannot be held for trial,” the petition said, adding that Under Section 3 (a) of Rule 117 of the Rules of Court, the information must be quashed if it does not charge an offense.

“The information does not charge an offense, since there is no one who was killed, therefore, there was no crime of homicide committed. Hence, the information must be quashed and the captioned case dismissed forthwith pursuant to the above-quoted rule,” they added.

One of the accused in the case, Commanding Officer Arnold Enrique dela Cruz did not join in the petition as he was arraigned for the same offense last July 7 when he entered a not guilty plea.