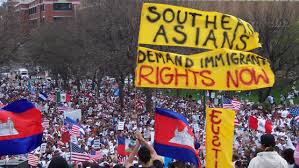 SAN FRANCISCO, California–More than 300,000 people who bought subsidized health insurance in states that did not set up their own marketplace exchanges have been told by Uncle Sam that they could lose their coverage by the end of next month if they do not provide proof that they are living in the country legally by September 5.

Problem is, the notices sent out to them are either in English or Spanish, which means that those who do not speak either of those languages are at a greater risk of becoming uninsured.

The Centers for Medicare and Medicaid Services (CMS) began sending out its notices in the second week of this month to consumers with a citizenship or immigration data matching issue, who had been placed in a so-called “inconsistency status.”

Consumers were moved to that status when the information they provided at the time of applying for insurance through the exchange did not match the data the government had on file. The notices were sent out only to people who had not responded to calls, letters and e-mails from CMS pointing out inconsistencies.

Notices in English, Spanish only

Asked why notices were sent out in only English and Spanish, a CMS spokesman told NAM via e-mail: “The majority of consumers with a citizenship/immigration data matching issue checked English as their preferred language on their Marketplace application. Of the 310,000 people receiving letters, about 58,000 (or nearly 19 percent) indicated a Spanish preference on their application.”

A total of about 310,000 consumers, out of roughly 970,000 people who had been placed in the inconsistency status, have yet to respond, according to a CMS Aug. 12 press release.

“The good news is that many have responded – we’ve closed about 450,000 of these cases and have an additional 210,000 cases in progress,” CMS Administrator Marilyn Tavenner said in the press release.

In Pennsylvania alone, 12,000 notices were sent out this month.

“We’re hoping (our clients) will understand the urgency of what’s in the notice,” said Amy Jones, director of health and social services at the Philadelphia-based Southeast Asian Mutual Assistance Association Coalition (SEAMAC), a 30-year-old non-profit that helps new immigrants access services in their community. “We don’t know how many of them will just toss it away.”

Pennsylvania is among 36 states whose health insurance marketplaces are run by the federal government because they declined to set up their own. Since last year’s Open Enrollment, SEAMAC has helped 450 Philadelphia families, most of them immigrants from Nepal, Indonesia, Vietnam, China and Burma and all of them with little or no knowledge of English, to enroll in the online marketplace.

Nguyen said that when SEEMAC asked CMS why it limited the notices to English and Spanish, CMS told them that it was not “worth” investing in more languages because they did not see a need for it. Nguyen said he even suggested to CMS to contract with language services and get the notices translated, but so far that has not happened.

He wondered why CMS bothered to include a question on the online application form that asked what the consumer’s primary language was when it hasn’t used that information to help the consumer.

Worried that the clients it has helped to purchase insurance might lose it, Nguyen said he requested CMS to let him know how many of them have been asked to provide more documentation. CMS declined to identify them, citing privacy issues. So Nguyen said SEEMAC printed out flyers in different Asian languages and distributed them to the 450 families.

California, like some other states that are running their own health insurance marketplaces, will be following the federal government’s example and will be asking its 100,000 consumers who have been placed in the “inconsistency” status for additional documentation to prove they are legally residing in the state so they can retain their health insurance purchased through its marketplace, Covered California. Of the nearly 1.4 million Californians who bought health insurance through the marketplace, some 17 percent is Asian.

Covered California Public Information Officer Roy Kennedy said he couldn’t say just how many Asians the notices were going out to, only that California would start sending them out in early September and consumers would have 30 days to respond. All notices would be either in English or Spanish. Pressed by NAM to respond why no Asian language had been included, given that nearly 15 percent of the state’s population is Asian, Kennedy said via e-mail:

“We realize the notices could impact consumers who speak other languages as well. Covered California is assessing whether to translate the notices into additional languages. Meanwhile we are reaching out to our many certified insurance agents and enrollment counselors who speak multiple languages and can assist non-English speakers in their local communities with questions regarding Covered California’s request for verification of lawful presence.”

“We certainly don’t want folks not speaking English or Spanish to have their coverage terminated,” noted Cary Sanders, director of policy analysis with the California Pan-Ethnic Health Network. “(Covered California’s) ultimate goal has to be consumer rights.”

She warned that by not sending out notices to consumers of potential terminations of important health benefits in languages the consumers can understand, the state would be in violation of its Language Access Law, which C-PEHN helped support.

Jennifer Rejeske, health policy analyst with the Los Angeles chapter of the National Immigration Legal Center, said that consumers first had to deal with a plethora of glitches on the federal marketplace exchange during Open Enrollment, now many of them are facing the threat of having their health benefits terminated. She said that if that happened, many of them would not be able to afford to buy private insurance with federal subsidies.

SEAMAC’s Jones said that CMS’s negligence to translate the notices into the primary languages of consumers is putting “the financial and time burden to communicate this information” on community-based organizations such as hers.

“This poor communication from CMS creates confusion and distrust in the communities,” she said. “This may be a deterrent for some people to apply during the next open enrollment.”