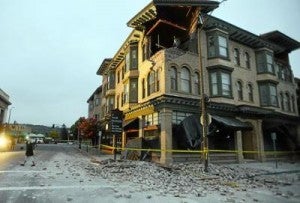 An estimated 51,000 Filipinos reside in the Vallejo-Fairfield metropolitan area. There are no reported injuries among them at press time.

The quake shattered several storefront windows in the downtown area, and bricks fell from a section of wall on the Sonoma Boulevard side of the First United Methodist Church.

“(Vallejo) residents have reported loss of water from several water breaks, minor roadway damage, minor gas leaks,and power outages,” according to a City of Vallejo press release. “A road has been closed on Mare Island at Nimitz and Rickover streets.”

The city said that most of the damage has been limited to “collapsed awnings and facades, broken windows and glass, and one confirmed partial collapse on Mare Island,” according to an updated release.

The Times Herald reports that Nimitz Avenue on Mare Island is closed from Seventh Street to Bagley, and 1145 and 1155 Nimitz Ave. have been red-tagged.

State Route 37’s Sonoma Boulevard exit was closed shortly after the earthquake due to safety concerns but has since reopened.

Andrea Garcia, Director of External Relations at Touro University California, said that books and other paperwork fell from walls and desks but no other damages were reported.

Touro University is located on Mare Island and is housed in older buildings.

Napa suffered significant damage, with two commercial buildings in the downtown area severely damaged. Gov. Jerry Brown declared a state of emergency for Napa after the quake, the strongest to hit Northern California in 25 years, reports the Times Herald.

“Dozens of patients have been treated or are being treated at Queen of the Valley Hospital,” according to a City of Napa press release. “There are two major injury cases known at this time.

“Four mobile homes were destroyed and two on fire on Orchard Avenue in north Napa,” says the press release.

There were reports of a young child seriously injured by a damaged fire place. The child was flown out of the area for treatment.

According to the release, there were 30 water main leaks, as well as damage to Sam Kee Laundry building, the Goodman Library and the Napa County Courthouse. A Red Cross evacuation center has also been set up in the Napa High School Gym, and drop boxes for debris will be placed at all public schools.

Residents in the effected area are being asked to check water heaters and check for the smell of gas.

Law enforcement has also asked individuals to stay away from damaged area to allow emergency personnel access the area.

o report yet of casualties in San Francisco quake