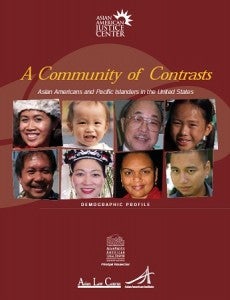 They also rank second only to Indians for having the least poor and least low-income community members among all Asians in the state. But they also have the lowest admission rates in the University of California system.

One of the study’s aims is to “debunk the model minority myth” by showing the complexities within the Asian population as well as the diverse economic and health realities experienced by each ethnic group.

Crunched from Census data and statistics from several federal and state agencies on the decade spanning 2000 to 2010, the findings present a detailed look into each of the 23 distinct Asian ethnicities concentrated in California.

Filipinos are the largest ethnic group in California at 1.5 million, followed by Chinese at 1.4 million. The Filipino population grew 34 percent during the decade, mirroring the rapid overall Asian American growth rate.

Indeed, while Latinos are projected to be the majority population in California by 2014, Asians have a faster growth rate of 34 percent compared with Latinos at 28 percent. Whites, meanwhile, declined by five percent.

Up to 55 percent of Filipinos were born in the Philippines, and they represent the highest number of immigrants among Asians who acquired permanent residence in ten years—255,987.

As a result, Tagalog is next only to Chinese as the most spoken among Asian languages. But reflective of diverse ages and educational and social backgrounds, 19 percent of Filipinos over five years old have limited English proficiency.

Filipinos are also intermarrying and having offspring with other ethnic and racial groups–16 percent are multiracial.

Filipinos are relatively well educated. Up to 93 percent of Filipinos have a high school diploma or higher, and 46 percent have a bachelor’s degree or higher.

But along with Laotian, Cambodian and Pakistanis, young Filipinos have the lowest University of California (the state university system) admission rates.

However, the Filipino community is next only to Indians in having the least poor and least low-income members among Asian groups in the state—6 percent of Filipinos are poor and 17 percent low-income.

More than half of Filipinos in the state–58 percent–are homeowners, while 42 percent are renters, compared with 63 percent Chinese homeowners and 64 percent white homeowners.

Heart disease, cancer, stroke and diabetes are the leading causes of death among Filipinos in California, and 11 percent of them have no health insurance.