US newsman honored, honors other colleagues 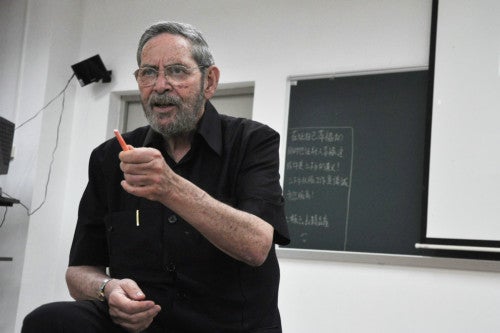 I am honored to accept this award, not in my name but in the name of the Foreign Correspondents Association of the Philippines (Focap) and the many good, courageous reporters who braved pressure from a military-backed dictatorship to spread the news.

I am honored to be mentioned in the same breath with Sandy Burton [The late Sandra Burton was Time’s Hong Kong bureau chief].

Others are deserving of recognition for the reporting they did during the Marcos-era from the Philippines.

I am thinking of friends such as Lew Simons, who earned a Pulitzer in 1986 for telling the end of the Marcos era story and now lives not far from me in Washington; Harvey Stockwin, who still is slaving away as a journalist in Hong Kong, and Bernie Wideman, who now lives in suburban Massachusetts and was a lot smarter than I was because he immediately went to Lorenzo Tañada when he was threatened with expulsion and thereby staved off becoming another American tossed out of the country.

We all benefited from the zeal of Gaby Tabuñar, a prime mover in setting up the Focap.

I benefited from the wisdom of Gil Santos who was the institutional memory of the Associated Press (AP) bureau, our back channel to Imelda and who gamely took much of the flak I provoked with my outrageous reporting.

I was fortunate in friendship with Teddy Benigno, Max Soliven and Mike Marabut.

Instead of receiving tribute, I want to pay tribute to one of the most courageous reporters I’ve ever known—Ben Alabastro [now a senior desk editor with the Inquirer].

Ben worked for Agence France-Presse when I came to the Philippines. Pretty soon, I noticed he was reporting news of the sort that eventually got me thrown out. For him, that reporting was even more dangerous. While we foreigners faced only expulsion, Ben faced threats to his livelihood and to his family. I wanted him to work with me at AP. He refused, evidently thinking we were too hot a couple working together. After I left the Philippines, he agreed to work for AP. Ben, I salute you.

I also want to salute a dear friend, Lupita Kashiwahara, Ninoy’s loving sister. She once stood up to Imelda who claimed I was reporting bad things about the Philippines because I was troubled by my Philippine girlfriend. Oh no, Lupita told Imelda bluntly but not totally accurately about me, “he’s chaste.” No one ever has said anything nicer about me.

Finally, I must pay tribute to a gallant woman whom I was always honored to call friend—Eggie Apostol [Eugenia “Eggie” Apostol is the founding chair of the Inquirer]. She will be 89 years young in a month. Few people have done as much for a country as Eggie has done for the Philippines. This country is so lucky to have her.

It’s been at least five years since I last visited the Philippines, but hardly a day goes by without some recollection or memory of the country. I’ve followed its ups and its downs, often with great frustration. I wish the country and its many gracious and talented men and women well.

Thank you for remembering me.

(Editor’s Note: The author covered the early days of martial law in the 1970s while serving as bureau chief of the Associated Press. He was expelled by the Marcos regime in 1976 for his reporting of the Moro  separatist rebellion in Mindanao and of the lavish spending of the administration during the World Bank conference in Manila that year. He wrote about Benigno Aquino Jr. during the opposition senator’s exile in the United States. Last week, during the 31st anniversary of Aquino’s death, he was awarded the Ninoy Aquino Memorial Medal of Valor for freedom fighters and leaders who assisted the cause of restoring democracy in the country. Others who received awards from Ninoy Aquino Movement this year were former US President Jimmy Carter; the late Sandra Burton, former Hong Kong bureau chief of Time magazine; Vice President Jejomar Binay; the late educator Alejandro Roces; martial law activist Fernando Martin Peña; lawyer Charito Planas; and the International Lawyers Committee for Human Rights.

Zeitlin is now managing director at a US-based worldwide news media consulting firm, Editorial Research & Reporting Associates and a visiting professor for the Department of Journalism at Guangdong University of Foreign Studies in China. Unable to come to Manila to receive the award, he asked that this acceptance speech be read during the ceremony.)