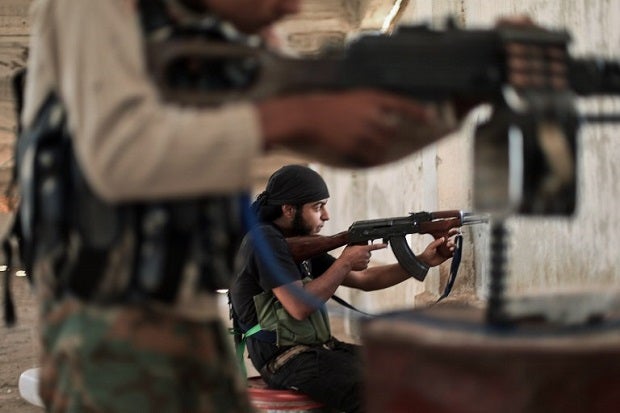 Rebel fighters from the Islamic Front, Syria’s largest rebel coalition, hold a position on July 13, 2014 during clashes with militants of the Islamic State (IS), formerly known as the Islamic State in Iraq and the Levant (ISIL), for the control a village on the outskirts of Aleppo. The death toll in Syria’s three-year war has eclipsed 170,000 people, one-third of them civilians, the Syrian Observatory for Human Rights said in a new toll released on July 10. AFP PHOTO/AHMED DEEB

DAVAO CITY, Philippines—The Bangsamoro Islamic Freedom Movement (BIFM) confirmed Friday that it has forged an alliance with the Islamic State in Iraq and Syria.

However, Abu Misry Mama, BIFM spokesperson, said they have not sent any of their men to Iraq or Syria to fight alongside ISIS, or even to train there.

Earlier, former president Fidel Ramos said around 100 Filipino Muslims had gone to Iraq and Syria to train there and help ISIS in its campaign to put up a Caliphate.

ISIS or the Islamic State of Iraq and Syria is the successor Islamist militant group that emanated from Al Qaeda in Iraq.

“There is no truth to the reports that we have sent fighters to Syria and Iraq. We do not need to train there because our training grounds in Mindanao are enough already,” Mama said in a telephone interview.

He said members of the BIFM’s armed-wing, the Bangsamoro Islamic Freedom Fighters (BIFF), did not need foreign trainings.

“In fact, there are also no foreigners in our camps to train us because we can train on our own,” Mama said.

But while denying the BIFM has sent fighters to Iraq and Syria, Mama said an alliance had indeed been formed between ISIS and BIFM.

He said the alliance between ISIS and the BIFM was finalized through the use of mobile phones and the Internet in July.

He said it was BIFM vice chair for political affairs Sheikh Ismail Abu Bakr and the group’s Islamic Supreme Council chair, identified only as Kuti, who formalized the alliance.

“There was also a time that they directly communicated with Abu Bakr al-Baghdadi,” Mama said.

Al-Baghdadi is the self-proclaimed “Caliph” or head of state of the Islamic State, as ISIS is also known.

“In the alliance, we have agreed that we are brothers under the same sky… that if one finger is hurt the entire body will feel the pain,” Mama said.

But the BIFM mouthpiece said his organization did not financially benefit from the alliance.

“If we will ask them for money they might send us millions but we are not asking for any,” Mama said.

He said the funds the BIFM uses for its operational expenses come mostly from “supportive businessmen and politicians.”

“They believe that we are fighting the right war that is why they support us financially,” Mama said.

Aside from moneyed individuals, he said,  Moro communities also keep the BIFM alive by pitching any amount they could afford.

This is not taxation, he said, but a “required charity contribution” by the communities to “fund the jihad.”

“For example, if you till the soil and you harvest 10 sacks you give one sack to the mujahideens,” Mama said.

Reacting to the beheading that the ISIS had reportedly conducted, Mama said it must have been strictly guided by Islamic principles.

“You cannot just cut hands and heads because you want to. It is being done as part of a judicial process. Your hands will only be cut if you steal and the beheading is only done to those who killed people as a crime,” Mama said.

He said for example, the BIFM had to expel one of its senior leaders for the beheading of two civilians in Midsayap, North Cotabato in September 2013.

Mama said one of those beheaded, 31-year-old Ricarte Dionio, was a policeman – who had become a legitimate target.

But he said beheading him was inappropriate and a violation of the rules of the BIFM.

He said because of this, then BIFM vice chair for political affairs Muhammad Ali Tambako was expelled from the rebel group.

“The man was a legitimate target but the beheading was unnecessary. What is worse is that the man was beheaded even if he was dead already,” Mama said.