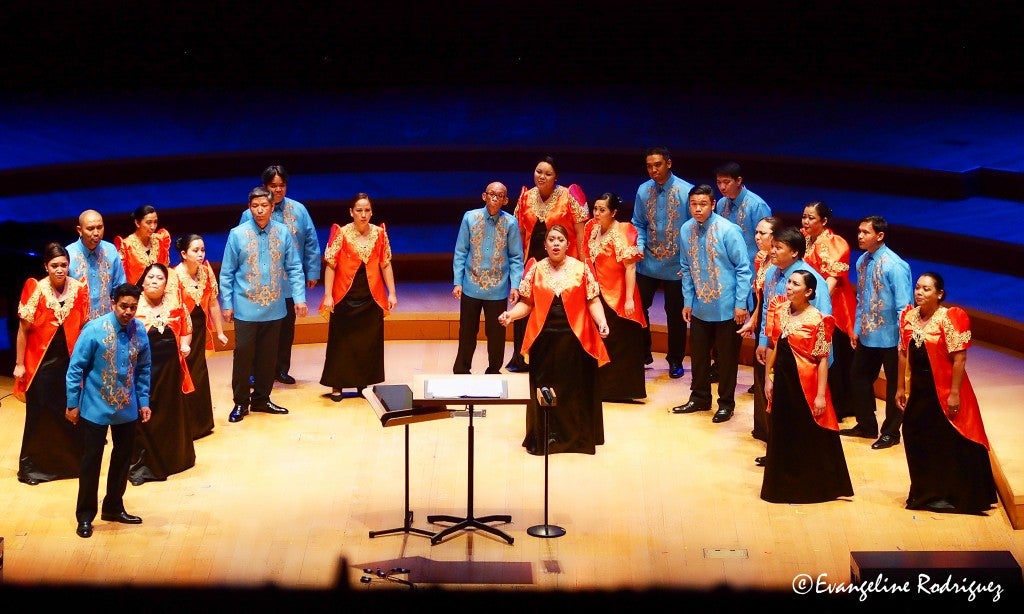 The chorus’ harmonies vibrated through every square-inch of air in $300- million concert hall, exploiting the perfect acoustics of the concert stage. One could sense the culture flowing in the passionate renditions.

Celebrating its 10th anniversary, PCS_LA commissioned Louie Ramos to arrange a collection of songs including renditions of “Humayo’t Ihayag” and “Hindi Kita Malilimutan.”

It was an eclectic repertoire, from “Kayo Mungaay Daun Iddem-Dem Mallida” (arranged by Ryan Cayabyab and Lino Abrio) to the spiritual “Ave Maria” all the way to silly renditions such as  “Da Coconut Nut.”   Asuncion Ojeda, a masterful kulintang musician brought a crisp Southern flavor to the ”Kayo Mungaay” Muslim song.

The audience gleefully received the various compositions by the Philippines’ celebrated artists including Ernani Cuenco and Restie Umali, as well as arrangements by Emmanuel Miranda (“Gaano Kita Kamahal/Saan Ka Man Naroroon”), some serious and some comic.

“Rosas Pandan,” a folksong from the Visayas was one of the audience’s favorites it broke out in applause at the first notes. “O Ilaw,” a lovers’ serenade, was similarly received.

Certain audience members of course had special investment in viewing the performance. Claudia from Los Angeles came see her 11-year-old daughter, Catherine, contribute her talent to the Immaculate Heart of Mary Children’s Choir, which spent some stage time with the Chamber singers. Its “Sitsiritsit” was delightful and almost a novelty since it was sung by an ethnically diverse set of singers.

Ida Teodoro of West Covina  said she has been interested “in these type of performances, ever since I was able to see the Madrigal Singers play when I was in college. Some of the members who performed for the world-class Madrigal are part of, and performing tonight for the Chamber tonight.” One of those performers was tenor Edwin Andaya, a prominent soloist.

Towards the end of the night’s performance, plenty of mellow and slow-paced music having been rendered, conductor and arranger Anthony “Gelo” Francisco explained microphones previously placed up close on the front of the stage. It wasn’t conventional to use microphones in an acoustically equipped venue, he said, but he wanted to capture another special Filipino tradition — karaoke!

With much laughter from the appreciative crowd, the choir gave renditions of  some well-known karaoke pieces in a ‘60s medley with “Up, Up, and Away,” “Betcha By Golly Wow,” “You are Everything,” “Stop! In the Name of Love” and “I’m Gonna Make You Love Me.” A standing ovation ensued.

To cap off the night, the performers came together for the show-stopper “As Long As I Have Music,” an extensive piece that reverberated throughout the hall with passion, drawing thunderous applause from the audience once again.