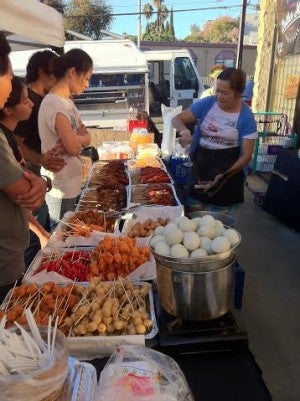 LOS ANGELES—The posts and blogs from the social media were increasing and too many to ignore, so I decided to pay a visit. After all, Dollar Hits Pinoy Street Food was just up my alley, two miles away from work at the LA Civic Center.

The trendy street barbecue fare juts out of Temple Mart in Historic Filipinotown on Temple Street. It is what you would call the poor man’s bunker hub, a few minutes drive from white-collar business center downtown. Temple is dotted with Filipino restaurants that have changed owners over time but still persist because there is a captive market longing for the nostalgic taste of home.

At 6 p.m., the line starts forming, the patrons looking like more of the young millennial college types from Westwood than those of Evans Community College nearby. Elvie Chan, proprietor of the street food, calls out to the waiting patrons: “Malapit na! We have ‘Enrile, Betamax, Adidas, kwek-kwek, pares, goto!”

At 7 p.m. she claps: “Ready na — dollar everything!” drawing a roaring reception from the waiting “kababayans.”

For the unfamiliar, here’s a glossary: “Enrile” is a tempura coated head of chicken; “Betamax” is congealed pig’s blood forming a rectangular shape and grilled to perfection; “Adidas” is marinated chicken feet; “Kwek-kwek” is pigeon’s egg in batter; “Pares” is combination flavored jasmine rice and tender beef tendon and fat with meat simmered with spices; and “goto” or “lugaw” is the Philippines’ national food, basic rice porridge famous for its tripe and chicken ingredients and topped with crispy garlic and green onions. There’s “balut”; for those who are well versed in “Fear Factor,” that needs no further explanation. For the less adventurous, there’s always the go-to staple of the pork barbecue, marinated Pinoy way — copious amounts of sugar and garlic with soy sauce.

The line that has reached a block now startsmoving, patrons seemoblivious to the tedious wait, chatting away. They buy not one or two sticks of barbecue; they fill aluminum trays with the delicacies that remind them of what they’d left behind.

“I spent $35,” says Julius from Corona (some 60 miles away), who heard about “Dollarhits” from Instagram and Yelp (probably posting his own delicious meal on the app later on). 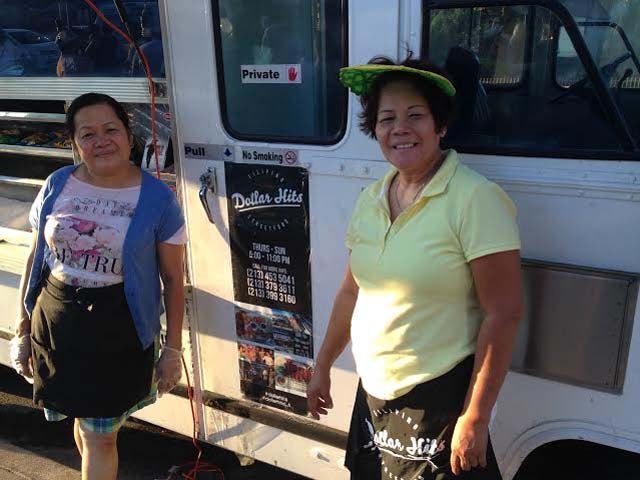 Mark A. from Anaheim blogged: “Being born in the Philippines, this was a great experience for me. The ambience reminded me of back home when eating street foods such as isaw (intestines), betamax (pork blood), and adidas (chicken feet) was the best alternative for lunch and dinner. The background music added the great experience as well as the friendliness and hospitality of the vendors. Parking is very limited so you may need to park on the side street. Food is already precooked and you can heat it up on the open grill near the food truck. The taste is to look forward to on its own, but it’s the overall experience that makes it fun.”

The line is obviously entertained by Hotdog music blaring in the background:

Take me back in your arms Manila

Dollar Hits was started in January this year by the three enterprising Chan sisters and family. Elvie, Josephine and Nellie from Pampanga know from the heart what Manila street food means to the homesick.

“Balik sila ng balik; we’re here Thursday to Sunday from 6 to 12 midnight. Don’t come late on Sunday ‘cause the food is gone early. Sometimes tourist buses come and stop to buy on the weekends. There are customers who spend hundreds to take to potlucks. Vegas residents, people from up North like San Jose, San Francisco, from out of the country come; they who found us in Facebook,” says Elvie.

Most of the food is pre-cooked and colorfully arranged next to the large food truck parked at the old Pinoy market owned by the Chan family. There are three large barbecue pits at the store’s parking lot where patrons heat up their prized buy. There’s an endless bonus of cantaloupe melon drink– “sa malamig” for a dollar.

Despite warning visits from the County Environmental health inspectors, the joint has kept open, optimistic that its compliance with standards (and the inspectors’ own hearts) would keep it operating for a long while.

Other street vendors of various ethnicities have opened similar haunts nearby attracting patrons with the sight and smell of billowing smoke from the outside grills. None of those we passed by offered the same festive atmosphere as Dollar Hits.

Omar from Colombia in South America is among those trying to keep a place in the line with his wife Angela. His favorite is “goto,” of course flavored with patis and lemon, along with its toppings.

“We’re on vacation in LA and my wife introduced me to this place and besides the delicious food, it reminds me of a festival.”

And it’s cheap. A meal of goto and two barbecue sticks would cost $3. We saw families lining up to get their generous amount of dinner for an affordable price. Even though the low prices are countered by the high calories, who’s afraid of cholesterol? Obviously not the young who frequent the place daily.

An immigrant to LA for more than 45 years, Muni observes that the lines at Dollar Hits beat even the number of patrons of the famous Tommy’s a few blocks away. “I’ve never seen a Filipino street business do this well; what a concept!” he says.

As the song goes: “Miss you like hell, Manila!”