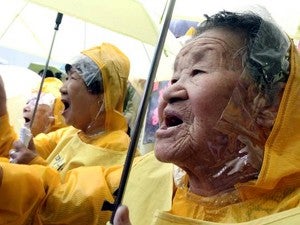 MANILA, Philippines—The Supreme Court dismissed the motion for reconsideration filed by more than 70 Filipino comfort women who sought a reversal of its 2010 decision.

“The motion for reconsideration has been denied,” high court’s Information Chief Theodore Te said at a press conference.

The high court, in its 2010 decision written by Associate Justice Mariano Del Castillo, denied the petitioners’ motion to declare that the Philippine government is guilty of grave abuse of discretion amounting to lack or excess of discretion in refusing to espouse their claims for the crimes against humanity and war crimes committed against them.

The high court said while they sympathize with the petitioners, they said it’s not the judiciary but the political branches that the petitioners should approach to get support for their claims.

The petitioners are all members of the Malaya Lolas Organization, a non-stock, non-profit organization established for providing aid to the victims of military sexual slavery and violence by Japan during World War II.

In their petition, the victims argued that the general waiver of claims made by the Philippine government in the Treaty of Peace with Japan signed in 1951 is void.

“For us to overturn the executive department’s determination would mean an assessment of the foreign policy judgments by a coordinate political branch to which authority to make that judgment has been constitutionally committed,” it added.

The high court’s decision became controversial after the author of the decision was accused of plagiarism. But the high court cleared Del Castillo saying what happened was an accidentally omitted footnote by the Justice’s staff.

Aside from Del Castillo, Associate Justice Marvic Leonen did not take part in the deliberation.