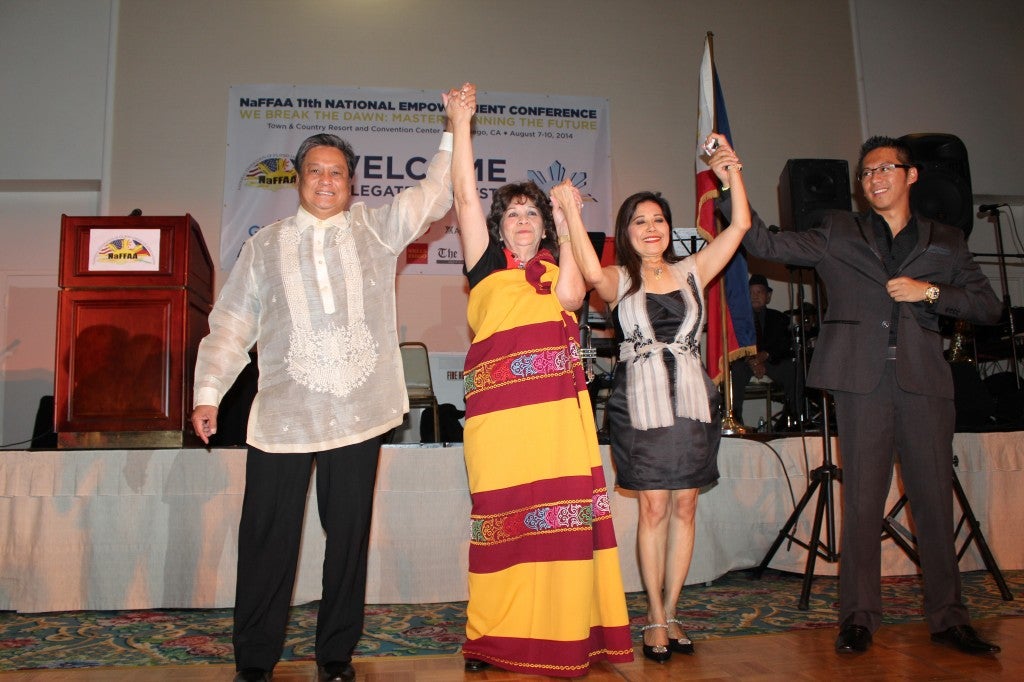 SAN DIEGO, California – A New York lawyer was elected chairman of the National Federation of Filipino American Associations (NaFFAA) along with a new national leadership at the conclusion of its “empowerment conference” held here on August 7 to 10.

Voted National Chairman was lawyer J.T. Mallonga, with Emraida Kiram of Madison, Wisconsin as vice chair; Mariella Fletcher of Seattle, Washington as secretary, and Brendan Flores of Orlando, Florida as treasurer. They will serve a term of two years.

Mallonga appointed Giselle Rushford of Denver, Colorado and Region 5 chair, as executive director. “The challenges we confront are formidable,” said Mallonga. “That’s why we need to bridge the intergenerational divide, forge partnerships and strengthen our capacity to address and advocate for the issues raised in this conference.”

He cited some of the challenges facing the community coming from the following issues: immigration reform, Temporary Protected Status for Filipino nationals, aid to families affected by Typhoon Haiyan, health care and services to the elderly, affordable education, voter mobilization and justice for Filipino World War II veterans.

“We must continue our advocacy role as the voice of the four million Filipinos in America,” said Mallonga, who is also the founder of the Filipino American Legal Defense& Education Fund (FALDEF).

He noted how in the last two national elections, only 500,000 Filipino Americans out of the 1.5 million eligible voters registered to vote. More than 500 delegates and guests attended the conference held at the Town and Country Resort & Convention Center.

Esclamado’s widow Lourdes flew in from North Carolina to present the awards to the Council for Filipino American Organizations of Central Florida, West Bay Pilipino Multi-Service Inc., Philippine American Chamber of Commerce of Texas, and Pilipino American Unity for Progress Inc. or UNIPRO.

Twenty-six-year-old Jason Tengco, the youngest ever senior advisor to serve in the White House, led off the array of youth speakers.

He bemoaned the glaring absence of Filipino Americans in the White House and federal agencies and urged NaFFAA leaders to collaborate with the White House Initiative on Asian Americans and Pacific Islanders (WHIAAPI) on the national and regional levels.

“I see a lot of Filipino cooks but not very many Filipino American staff doing policy,” he said.

“We’re not even represented in the US Congress. We must ensure that we have a place at the table so our voices are heard by Washington’s policymakers. NaFFAA needs to find and field Fil-Ams in the highest levels of government.”

Entertainment entrepreneur Billy Dec, newly appointed commissioner to the WHIAAPI, also praised “the new movement of young Filipinos who have it together, whose talent and intelligence are being celebrated.”

He encouraged delegates to work together as a community, “share each other’s’ passions and continue to make history. Being the eyes and ears of the President of the United States, let’s all learn to collaborate so we can gain access to those who make decisions that affect our lives.”

Youth leaders who organized the 2014 Empowerment Conference are introduced during the Gala Dinner. Aurora Cudal, NaFFAA Region 10 Chair, drove home the point about collaboration between “young folks” and “older professionals,” by recounting how planning for this year’s conference came about.

She recalled how more than a year ago Leezel Ramos, a 26-year-old student leader, offered to volunteer in the planning. “I asked Leezel if she wants to help as secretary.” Cudal said.

“Her response was an emphatic ‘No.’ She said she wants to be the chair. After recovering from initial shock, I realized she was serious, and that’s how our partnership with the young folks began.”

Ramos immediately formed a team of youth organizers who came up with the theme, “Breaking the Dawn: Master Planning the Future,” created a web site, and mapped out the logistics, outreach and program for the conference.

“Our intention may have been to infiltrate and assume leadership,” explained Ramos. “But what matters is the impact of our actions and the relationships we build. Our elders may have been wary at first, but they were very supportive all throughout.”

“What’s notable about this year’s conference is the way we have opened up more opportunities for continued engagement between our seasoned veterans and the young folks,” said Greg Cendana, executive director of the Asian Pacific American Labor Alliance.”

Ben de Guzman, an advocate for LGBT rights, added: “We have come a long way from 1997 when we couldn’t even talk about gay rights. Today, we have at least changed the way we hold conversations about issues that divide us. We need to learn from each other and have conversations with thoughtfulness and respect.”

Jose Antonio Vargas, the Pulitzer Prize-winning journalist who revealed his status as an undocumented immigrant, drew a standing ovation when he shared his struggles and his efforts to educate the American public about the need for comprehensive immigration reform.

Before he decided to “come out,” he sought out NaFFAA’s support and was assured of the organization’s assistance. “I now look to NaFFAA to do everything it can to mobilize the Filipino American community and work for the passage of immigration reform,” he said.

Tony Olaes, board chairman of Gawad Kalinga USA, also challenged the delegates to be “proud of your Filipino-ness” and to celebrate the values of caring and sharing.

“The youth are now the messengers of these values, so we need to make sure they are connected to the motherland, because we are one Filipino rooted in one place, and our mission is to build and uplift the Filipino nation wherever we are,” he said.

“We cannot close this dark chapter in U.S. history until these soldiers who fought bravely in service of America receive the Gold Medal Award,” he said. “We need to work together to make this happen.”