An OFW’s story: 11 hours of terror in Libya

MANILA, Philippines—What began as a normal working day for overseas Filipino worker (OFW) Danilo Pecante, 47, a heavy equipment mechanic working in Libya, turned into an 11-hour long nightmare of being trapped in the middle of a raging gunfight between rival militias within the capital city of Tripoli.

“It was really a harrowing experience, it made me think ‘this might be the end’,” Pecante recounted in Filipino during an interview with INQUIRER.net Thursday.

“On the early morning of July 13, me and 11 of my fellow OFWs were already hearing gunfire close by,” he said. Their place of work was around 12 kilometers away from the center of Tripoli.

Pecante said they were used to hearing the sound of gunfire because of a nearby military camp that was used back in 2011 during the uprising that led to the fall of dictator Muammar Gaddhafi who had been in power for four decades.

“At around 6 a.m., we wondered why the sounds of gunfire were not stopping. Two hours later, we got to work but there was nobody there,” Pecante said.

“Our Libyan co-workers called and said that they could not come to work. We told them about the sounds of gunfire which were getting closer. That’s when we found out the rival militias have already began battling each other for control of the military camp,” he said. 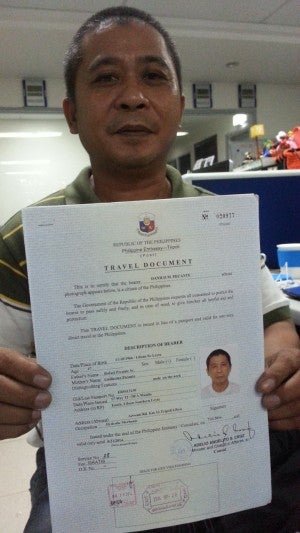 Danilo Pecante shows the travel documents issued by the Philippine Embassy in Tripoli so they could leave Libya.

The Filipinos and several other workers from various nationalities quickly moved to close the gate of their office compound and barricade it using two excavators in order to prevent the militias from getting inside where they hid.

“Around noon, the firefight outside our compound was getting worse and we were getting worried. All of us packed our things because we were thinking when an opportunity comes for us to escape, we will escape,” Pecante said.

“We were really scared because we could already hear the bullets hitting the walls of our office building as well as the exploding bombs. We’ve packed our things but we wanted to make sure we were safe because could not tell where the bullets were coming from,” he said.

They called the Philippine Embassy in Tripoli to inform them of their situation but help could not come because of the ongoing firefight.

“What we did was we secured ourselves. We hid in various areas in the building, we hid in comfort rooms just to save ourselves because the explosions were happening left and right,” Pecante said.

“There were very loud bomb explosions that shattered the windows of our buildings. Our fence was hit by an explosion and that’s when we became really scared because then they can come inside the compound, it’s already wide open,” he said.

Fortunately, they were able to survive the firefight despite being stuck inside their office building until around 4 p.m. when the shooting had stopped.

When the dust settled, it was evening. They coordinated with the Philippine Embassy personnel on what their situation was so they could be evacuated.

“We could see that there were already a few vehicles passing along the highway. Embassy personnel said they will come for us but we should be ready so they can immediately take us to the Philippine Embassy,” Pecante said.

“It was already dark when we were rescued by embassy personnel with Charge d’Affaires Adelio Cruz,” he said.

He and his fellow OFWs stayed in the embassy in Tripoli for two weeks before they could be transported to the border to go into Tunisia.

But even within Embassy premises, they could not feel safe because there were occasions when armed men would knock on their door.

“We used passwords to determine who were Filipinos and who were not. When somebody doesn’t do the correct knock, we looked through a hole to see if it was a Filipino or not and we would usually see armed persons,” Pecante said.

“Even if they were not armed men, Embassy personnel said we should not open because sometimes they would use a female accomplice to knock first and then once the doors are opened, the armed men would come inside,” he said.

He said the Filipinos inside the Embassy lived in constant fear because they would constantly hear explosions going off around them. Armed men could also be seen constantly roaming the streets.

“The embassy could really be infiltrated by militants. The embassy does not have security guards and there are even no police within the city,” Pecante said. 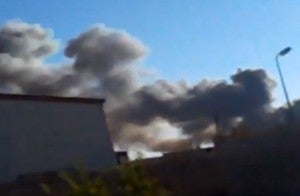 Smoke billows behind an industrial compound in Tripoli, the capital city of Libya, as war rages between rival militias. CONTRIBUTED PHOTO/DANILO PICANTE

“Within Tripoli, gunfights were breaking out. Few business establishments were open but we were really careful to go out because one vehicle of the Philippine Embassy was hijacked by militias when three Filipinos went out to buy supplies,” he said.

During the height of the evacuation when many Filipinos were being sheltered in the Embassy, they had to eat only twice a day to ensure their food stock would last.

Pecante said that early on, there was a Filipino supplier who would deliver food supplies to them, but it eventually became more dangerous so they needed to ration the food.

“After the two-week stay, we were able to travel to the Tunisian border. It took a long time because we could not leave without documents allowing our exit,” Pecante said.

“When we travelled to Tunisia by land, it was scary because of the checkpoints that were manned by armed groups who we could not identify whether they were soldier or militants,” he said.

From Tripoli to the Tunisian border, it was a five hour bus ride. Pecante said they saw another bus full of Indian nationals held up by militias.

Three Indian nationals were killed on that bus which was just five minutes ahead of them.

Eventually, after entering Tunisia, it took another eight hours of road travel to the city of Tunis where the airport was. From there they boarded flights to either Dubai or Qatar and then to Philippines.

Before the most recent outbreak of hostilities in Libya, Pecante said he had been repatriated during the first Libyan uprising in 2011.

“I have not experienced anything like this before. During the 2011 war, I experienced being caught in the middle of a crossfire for two hours. But this time for 11 hours there was non-stop fighting,” Pecante said.

He said he began working in Libya in 2007 but when the uprising against Gaddhafi broke out in 2011, he was among those who signed up for repatriation. 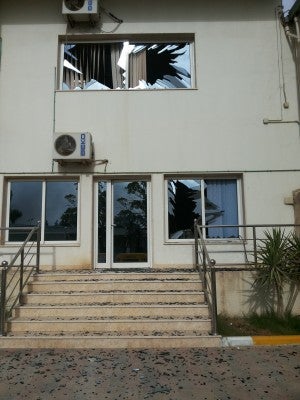 He returned to the Philippines then but could not find work. Pecante was able to return to Libya in 2012 after the deployment ban was lifted.

His two-year employment contract in Libya will end December but because of the repatriation had to go back to the Philippines again.

Asked about why many Filipinos continued to insist on staying in Libya, he said that they could not let go because of the high salary they were earning.

“Many of the Filipinos there they say that if they go home, they would not have a job in the Philippines. Most of them are also in the desert where there are fewer gunfights. They don’t experience the conflict, most of which are happening within the urban areas,” Pecante said.

“It’s their decision, they might think that their earning is more valuable than their life. But for me, what will I do with my money if I die or get hit by a bullet and become disabled? It’s useless,” he said. “Money can always be earned but my life is just one.”

Pecante earns $500 monthly plus overtime pay and meal allowances. He has a wife in Leyte and three children, the eldest of who is still in college taking up education.

He said he would have to find work abroad because it really was better than working in the Philippines.

“I am looking for another job so I can recover, maybe in another country, but not in Libya even if they double my salary,” Pecante said.

No repatriation plan yet for Filipinos in Ebola-hit countries – DFA