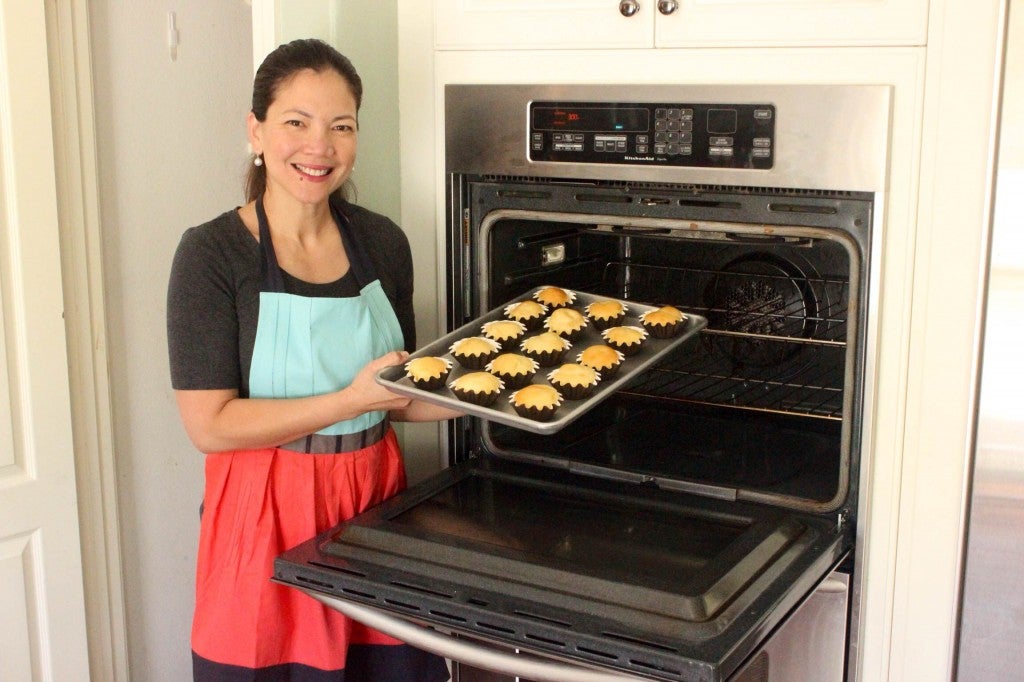 Chari Heredia-Reyes shows off her ensaymadas hot off the oven. PHOTO BY CRISTINA PECZON-RODRIGUEZ

•One-woman baking operation has sent out 50,000 ensaymadas all over the US

MISSION VIEJO, California — One of my fondest memories of as a child was popping my head into the kitchen as my Tita’s baker painstakingly went through the tedious process of making her ensaymadas, the brioche-like, sugar-flecked bread brought by the Spaniards to the Philippines.

I remember the process took way too long for a little girl’s patience, but the result was oh, so delicious. My grandmother’s kitchen underwent the same process for the holidays, and they would make these amazing, large fluffy pastries that were big as dinner plates and just melted in the mouth. When my Lola passed away, those wonderful goodies were just never the same again and so I gave up on them.

Many many years later, while living in California, I came across a carefully wrapped box of ensaymadas that a friend couldn’t stop raving about. I wasn’t convinced but decided to try them so as not to insult my friend. Oh. My. Goodness! I was in love!

It comes as no surprise to me that the ensaymadas made by Chari Heredia-Reyes are just as amazing as those I grew up with. You can tell that despite having shipped out more than 50,000 (yes, 50,000!) out of her kitchen, Chari makes each and every piece like she was baking for a loved one.

Growing up in Manila, Chari grew up helping her mother’s seasonal tradition of preparing ensaymada to share with family and close friends. The ninth of 11 children, Chari says baking with her mom was a bonding experience. When she was at a crossroads at the University of the Philippines, her mother told her to take a year off and she would teach her how to bake. Who knew it was planting the seeds of the career of her dreams.

“Baking though makes me way happier since teaching was not really my passion. It’s baking. Seeing those happy faces trying my ensaymadas – priceless!” she explains.

That passion kept on calling, so in 1993 she decided to open her own business called Chari’s Kitchen. When Chari’s mother used to prepare ensaymada as a special treat exclusively for family Christmas dinners, it was a tedious 12- hour process produced only a few dozen of the moist, buttery, snailed dough. Working side by side in her mother’s kitchen all those years, Chari had memorized her mother’s recipe by heart, and had eventually tweaked it a little here and there, and continued to bake while teaching. 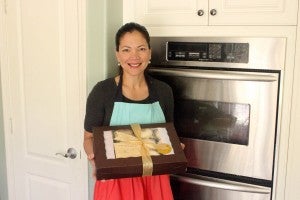 But life had a few more twists to her story. Chari left Manila to visit California, where she bumped into childhood friend and CIA chef Ramon Reyes– and the rest was a happy, romantic history. However, four kids and a couple of teaching years later, Chari felt the call once more, and decided to revive Chari’s Kitchen in 2010.

“Growing up, I had definitely enjoyed watching my mom bake and seeing a whole staff helping. But California baking is basically baking on my own, and I was missing the staff when this began.”

Working in her own kitchen in Southern California, Chari had to make changes to make her ensaymada chewy, just like they are back in Manila. But climate differences here affected how the dough rose, so she had to add a “proof box” that adds humidity to the sensitive ensaymada dough to make sure each one came out with just the right stickiness, chewiness and pull.

Three years into Chari’s Kitchen, she proudly says she perfected her craft. After many long hours of work and recipe adjustments she made after listening to both the critiques and encouragements of her customers and friends, she now proudly feels she is making her very best.

Being married to a chef has also added to her craft. Ramon lends additional formality to her baking by teaching her the science behind the “proofing” of her ensaymadas. Her children have their own inputs as well – testing flavors and “approving” her dough if it is not up to their standards for moistness and chewiness.

Running her business in California as opposed to running a business with a staff in Manila “ is worlds apart” as far as Chari is concerned, “I wouldn’t put too much care I guess if I knew I could designate and delegate each task to someone. From snailing to icing to wrapping to boxing to shipping, the ensaymada project is a one-man show.”

The next chapter in Chari’s life was the creation of www.ensaymadaproject.com, her 24-hour online ordering business.

Chari bakes daily now, often waking up at the crack of dawn to prepare her savory treasures, sometimes as early as 4 a.m. If you are lucky, and there is stock, you can get your ensaymadas on the spot at her place in Santa Clarita but usually, one day’s notice is enough to order Chari’s savory treasures from her online.

The ensaymadaproject has a dozen flavors you can choose from – ranging from the buttery yet sweet classics, ube, maple bacon, dulce de leche, red velvet, or even green tea red bean to suit even the most adventurous of taste buds. She has minis for those who want to taste more than one. Believe me when I tell you that I have ordered from Chari more than once only to decide that I am NOT going to share with anyone else.

Her biggest order was one December when a doctor ordered 58 dozens of her ensaymadas. It took her almost 24 hours to prepare her orders, but she delivered on time! With her new online business, the ensaymadaproject.com can be ordered from anywhere in the world and delivered all over North America.

Given the choice between running her business back in Manila or here away from home in Southern California, “I’d stay put. I am late in the game and maybe there’s a reason. Other ensaymada bakers are established back home and it’s nice to prove you can establish it too overseas” Chari says. She cannot deny that there is Filipino pride and joy in making her mark with such wonderful treats even “Stateside.”

A year into the ensaymadaproject.com, Chari doesn’t miss the long drives she used to make to a baking facility before she acquired the required health permits to set up her cottage food license that allows her to bake at home.

In order to ensure that her moist and chewy goodies are just as mouth-watering as the moment they leave her molding trays, Chari drops off her hand wrapped ensaymadas at the post office herself for delivery to make sure they remain as fresh as possible.

“They know me and all the boxes (at the post office) and some drool and wonder what’s in there. There’s a Filipino who works there who stares at the boxes and I think my husband’s cousin who is her friend, gave her a box finally! I sometimes have USPS pick it up, but I don’t feel comfortable leaving the boxes outside in the heat.”

Her advice to fellow Filipinos thinking of setting up business so far from home?

“Put your heart into it. The goal is the happiest of customers. Everything else will follow.” While she is happy where she is now, her next step she hopes will be a food truck and a bakeshop probably sometime next year if all goes well.

Until then, Ensaymada Project LLC will be your link to some of these homemade goodies and enjoying a bit of back home, no matter where you are in the US.