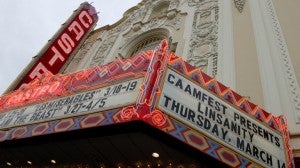 SAN FRANCISCO, California – Four days of film premieres, conversations with celebrated filmmakers and lively parties will return to San Jose, hosted by the Center for Asian American Media (CAAM) on September 4 to 7.

Celebrating its 12th year, CAAMFest San Jose presents films and events reflecting the impact and influence of Asian Americans in Silicon Valley and their “continuous innovation in technology, arts and culture, media and community.”

“Our San Jose festival is a convergence of Asian-American artists, innovators and community and celebrates their dynamic contributions to the region’s cultural and civic landscapes,” explained Masashi Niwano, CAAM’s festival and exhibitions director,

“We are excited to present a diverse and inspired program of local and international films that reflect the vibrancy of the nation’s third largest Asian population,” Niwano added.

Geeta and Ravi Patel’s “Meet the Patels” opens the festival on Friday, September 5, at 7 p.m., at Camera 3 Cinema in downtown San Jose, followed by the Opening Night Party at 9 p.m. at the beautiful San Jose Museum of Art (SJMA). The film follows comedian Ravi Patel, on the verge of turning 30 and feeling pressure to get married, as he ventures off to explore the various traditional Indian methods of arranged marriages. Along the way, he learns what it means to be in love, and how marriage is more than a commitment between two people. Director Geeta Patel will be in attendance.

Highly praised as the “Chinese Social Network,” three college slackers turned successful businessmen face copyright infringement lawsuits in one of China’s most successful box office hits of 2013. A modern telling of David versus Goliath, “American Dreams In China,” directed by Peter Chan (“The Warlords,” “Dragon”), is an aspirational and riveting story of the underdog’s rise to the top. Saturday, September 6 at 6 p.m. at Camera 3 Cinema.

Veteran director Lin Cheng-sheng once again finds cinematic success with “27°C Loaf Rocks,” a mouth-watering foodie flick based on the life of Wu Pao-Chun, Taiwan’s master baker. Along with the ensemble cast, Director Lin does a remarkable job bringing to life Wu’s extraordinary journey of passion and perserverance, from his apprenticeship in a Taipei bakery to his win at the 2010 Bakery World Cup. With the best in foodie films such as “Eat Drink Man Woman” and “Zone Pro Site: The Moveable Feast,” Taiwan’s cinematic legacy continues to grow with this glossy, family friendly feature. Sunday, September 7 at 7 p.m. at Camera 3 Cinema.

CAAMFest San Jose will host a special screening of “Yuri Kochiyama: Passion For Justice” by Rea Tajiri, commemorating the life and legacy of Yuri Kochiyama, a Japanese American icon and civil rights activist who continues to inspire new generations of Asian Americans (and beyond).  Yuri Kochiyama passed away at the age of 93 this past June. Director Rea Tajiri will be in attendance. Thursday, September 4 at 7 p.m. at the Japanese American Museum of San Jose. RSVP required. Please RSVP to [email protected].

Screening or Party Only $20

Passes and tickets are available for purchase online at www.caamedia.org beginning August 7, 2014. There is a $1.50 service fee for all tickets purchased online. You may also purchase tickets in person at the CAAMFest San Jose Box Office located in the Camera 3 Cinema lobby September 5-7, 2014.