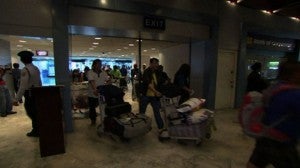 MANILA, Philippines–More than 2,000 Filipinos in Libya have signed up for repatriation this week, as the government made preparations to evacuate them by sea or land from the strife-torn North African nation before flying them home via Malta and Tunisia.

Among those who will be returning home is the Filipino nurse who was abducted and raped by Libyan youths, according to Assistant Secretary Charles Jose, the spokesman for the Department of Foreign Affairs (DFA).

Jose told reporters the government operation to remove Filipinos from Libya, to take place from Aug. 8 to Aug. 11, was going to be very expensive, running into millions of dollars.

The government will be spending $1.8 million (or 1.4 million euros) alone just to ferry the Filipinos from the Libyan port cities of Benghazi and Misarata, according to Jose.

It will be chartering two 400-capacity Philippine Airlines planes, forking out $1,400 per passenger, he said.

In Tripoli, 599 have signed up for repatriation. This group will be evacuated by land because Libya’s border with Tunisia has reopened.

According to Jose, 400 Filipinos employed by Hyundai from the Libyan city of Sirte, which lies between Tripoli and Benghazi, are tentatively scheduled to leave by plane on Aug. 8 through the Mitiga or La Braq airports in Libya. He said the costs of their repatriation will be paid for by Hyundai.

The number of the latest evacuees has now reached 2,037, a number that Jose conceded was a slight improvement from the earlier response of Filipinos in Libya to the government’s urgent call in June for them to sign up for voluntary repatriation and then for mandatory repatriation in July.
ADVERTISEMENT

Still, he said no one can know for sure if all the 2000 registrants will go home come evacuation day.

On the sea evacuation operation, Jose said the government’s Rapid Response Teams are now in two designated command centers—the office of the Red Crescent in Misarata and a residence of a Philippine embassy coordinator located inside the Children’s Hospital in Benghazi. These command centers also served as registration areas, he said.

The teams in Misarata are coordinating with the Red Crescent in obtaining ports, customs and immigration clearances; in providing transportation and security for Filipinos proceeding to designated convergence areas before they board the ship; and in providing accommodation for Filipinos in the surrounding areas.

“To make sure road travel will be safe, the Red Crescent will coordinate with local authorities, including militias, for the safe passage of the Filipinos to the ports in Benghazi and Misarata,” Jose said.

He said the ship hired by the government will arrive off the coast of Libya on Aug. 10 and will dock in Benghazi between 9 and 10 a.m. and will have a boarding time of five hours.

From Benghazi, the ship will sail to Misarata and dock there on Aug. 11, and will have the same five-hour boarding time.

“After Misarata, the ship sails to Malta and upon docking (on Aug. 12), the Filipinos will be transported directly to the airport,” he said.

For the 599 Filipinos from Tripoli to be evacuated by land “anytime soon,” Jose said they will pass through the Tunisian border now that it has reopened. From Tunisia, they are expected to take commercial flights back home, he said.

Since the DFA raised two alert levels in Libya in June and July following violence between the Tripoli government and rival militias, the government has so far, as of Wednesday, repatriated a little over 900 of the 13,000 Filipinos there.

With the return of the 2,035 Filipinos this week, there are well over 10,000 more of them remaining in Libya.