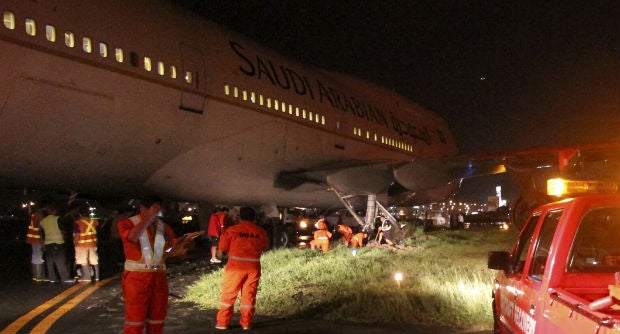 Airport crew and mechanics work to free a Saudia Airlines passenger plane which swerved off the runway and became stuck in the mud as it prepared to take off the Ninoy Aquino International Airport, at suburban Pasay city, south of Manila, Philippines, late Tuesday, Aug. 5, 2014. None of the 298 passengers was hurt, but at least 11 other flights were delayed by the blocked runway. AP

MANILA, Philippines–One of the pilots of the Saudi Arabian Airlines’ jetliner which swerved off the runway of the Ninoy Aquino International Airport (Naia) and got stuck in the mud as it prepared to take off on Tuesday night has admitted to aviation authorities that he “miscalculated the turn.”

The stalled Boeing 747 blocked Runway 6/24 which had to be closed for six hours as workers attempted to remove the aircraft, delaying at least 22 flights and stranding scores of passengers.

None of the 298 passengers and 26 crew members of the Saudi airliner was hurt. The passengers were taken away by bus and put up in a hotel.

Smaller planes like the Airbus 320 and Boeing 737 were allowed to use Runway 13/31 but a number of international flights using wide-bodied aircraft had to be diverted to the Clark International Airport (CRK) on Tuesday night.

“We were able to talk to one of the pilots and he admitted a miscalculated turn,” said Capt. John Andrews, deputy director of the Civil Aviation Authority of the Philippines (CAAP).

The Saudi pilots, Capt. Alfaraidhy Abdulmajeed Abdulraheem and Capt. Al Bassam Adnan Mohammed, were grounded and would be undergoing an inquiry by CAAP investigators, Andrews said.

Just as the plane was taxiing and maneuvering toward the runway, it skidded and veered off toward a grassy patch, with its landing gear getting stuck in deep mud.

It took six hours for the airport personnel to remove the stalled aircraft using a lifting bag to tow it to a remote parking area for further inspection.

The accident created a domino effect at the Naia, affecting commercial planes queuing at the runway for takeoff and approaching aircraft. Eleven of these were diverted to Clark and Cebu’s Mactan International Airport.

At 1:36 a.m. Wednesday, the CAAP cancelled its earlier Notice to Airmen that ordered the closure of the runway, and announced that the two Naia runways had the normal operations.

Jose Angel Honrado, the general manager of the Manila International Airport Authority, said Saudia would be charged for the accident.

Nine international flights that had been diverted to Clark returned to Naia by 3.36 a.m. Wednesday, said Victor Jose Luciano, president and chief executive officer of the Clark International Airport Corp.