Keep it simple, Church told, as plans for Pope visit get going 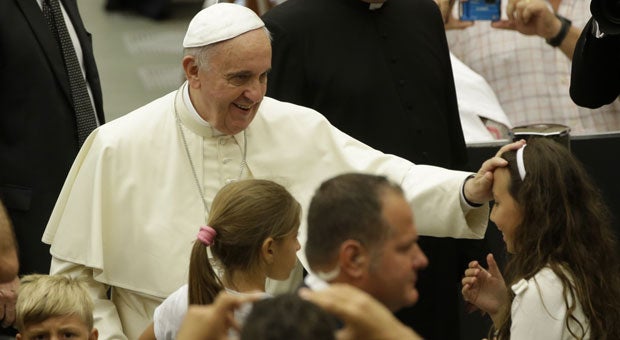 Pope Francis blesses a child during the weekly general audience in the Paul VI hall at the Vatican, Wednesday, Aug. 6, 2014. With his visit to the Philippines just five months away, preparations are already under way, including the widening of roads, in typhoon-stricken Leyte province, where he is expected to travel. AP PHOTO/ANDREW MEDICHINI

TACLOBAN CITY, Philippines—Pope Francis’ visit to the Philippines is five months away, but preparations are already under way, including the widening of roads, in typhoon-stricken Leyte province, where he is expected to travel.

Started three weeks ago, the road-widening project covers 11 kilometers from the San Jose area, where the Daniel Z. Romualdez Airport is located, to the nearby town of Palo, where Palo Cathedral is located, according to engineer Dionisio de Paz, chief of the city engineering office.

“We expect to finish the work by November,” De Paz said. He could not yet say how many houses and establishments are to be affected but added that the Pope’s visit had hastened the project’s implementation.

The roads will have four lanes, enough to accommodate the expected influx of devotees and motorists, the city engineer said.

But a prelate from Palawan province said a simple welcome would be the “best option” for both Church and government officials given the Pontiff’s propensity for austerity. Francis has been known for his humility and simplicity in manner and lifestyle.

“The activities and programs to be prepared must be in keeping with the Pope’s personality. Let us avoid holding costly, wasteful and extravagant receptions,” Bishop Pedro Arigo, apostolic vicar of Puerto Princesa, said in an article posted on a Church website.

“These, I think, will greatly displease him because they will not be consistent with his message of love and care for the poor,” he added.

The Pope has expressed his desire to meet survivors of Super Typhoon “Yolanda,” considered the world’s strongest storm to make landfall in recent history, during his five-day trip starting Jan. 15 next year.

Yolanda (international name: Haiyan) pummeled Leyte and other provinces in the Visayas in November last year, leaving some 6,300 people dead and 1,060 missing. Tacloban City was the worst hit, accounting for almost a third of the fatalities and more than P25 billion in damage to property and public structures.

“We are all excited at the visit of the Vicar of Christ. This will be a moment of joy and thanksgiving for us victims and survivors of Yolanda. The Pope’s visit will surely inspire us and give us hope,” said Fr. Amadeo Alvero, spokesman of the Archdiocese of Palo.

Francis will be the third Pope to come to the Philippines after Paul VI in 1970 and John Paul II in 1981 and 1995. He will be the first Pontiff in nearly two decades to visit the Far East when he travels to South Korea on Aug. 14-18.

Since Aug. 1, Masses for a “successful and meaningful” papal trip have been held in all churches within the Palo archdiocese, Alvero said.

Archbishop John Du has asked all priests within the archdiocese to hold Masses up to January, in time for the Pope’s scheduled visit to Eastern Visayas, home to 4 million Roman Catholics.

Alvero said details of the Pope’s itinerary, including where he would celebrate Mass, could not be divulged as yet for security reasons.

“What is certain is that Pope Francis will visit us, victims of the super typhoon,” he said. “And for this, we the faithful, are asked to prepare ourselves spiritually in prayer and in being merciful and compassionate to our brothers and sisters in need.”

The Catholic Church has launched a website dedicated for Francis’ upcoming apostolic visit to the Philippines after Sri Lanka.

The website (http://papalvisit.ph), which was created by the Catholic Bishops’ Conference of the Philippines (CBCP) media office, contains information, including articles and statements, related to the much-awaited event. One of those posted is a pastoral letter on how to prepare the people for the papal visit.

The website carries an icon showing a smiling Francis and the words, “mercy and compassion,” the central theme of the visit. “That has been the recurring theme of teaching, homilies, actions of the Holy Father,” Manila Archbishop Luis Antonio Cardinal Tagle explained during a press briefing last week when he officially announced the dates of the visit.

The website features a timer that counts down the remaining weeks, days, hours, minutes and seconds to Francis’ arrival and pictures of children from typhoon-hit areas, holding papers that carry their personal messages of welcome.

Bishop Arigo stressed that an expression of hospitality—a trait Filipinos are known for worldwide—marked by ostentation and insensitivity would likely be an insult to the poor.

He reminded the faithful to focus on the message that the Pope would be bringing instead of satisfying one’s personal “need” to brag about having met him in person.

Tagle neither confirmed nor denied reports that the Pope would go to the University of Santo Tomas (UST) on España Boulevard in Manila for a youth rally.

“But UST always figured in previous [papal] visits to the Philippines. We’re coming from that historical datum. Whether or not that will happen, we hope for confirmation at the end of the year,” he told reporters.

A video of “We are all God’s Children,” the official theme song of the apostolic visit, can be viewed on the website, as well as the National Prayer, which is said before the postcommunion prayer of every Mass from Aug. 1 to Jan. 14, 2015.–With a report from Tina G. Santos in Manila