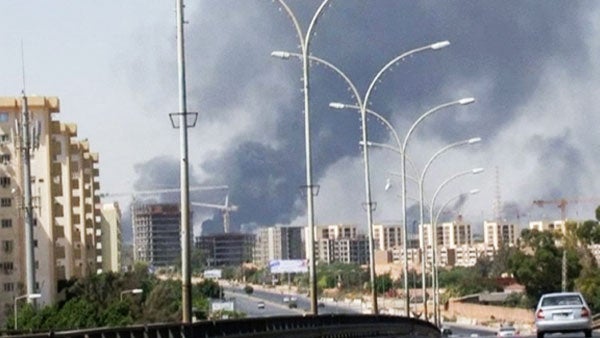 In this image made from video by The Associated Press, smoke rises from the direction of Tripoli airport in Tripoli, Libya, Sunday, July 13, 2014. Rival militias battled Sunday for the control of the international airport in Libya’s capital, as gunfire and explosions echoed through the city and airlines canceled some international flights. AP

MANILA, Philippines – The Department of Foreign Affairs (DFA) on Sunday ordered the mandatory evacuation of Filipinos in Libya as conflict in the country escalates.

“Under Alert Level 4, the Philippine Government undertakes evacuation of about 13,000 Filipino nationals there as soon as possible while no Filipino national will be allowed to travel to Libya,” DFA said in a statement.

It said the raising of the alert level was “in response to the extremely unstable political and security situation there.”

Filipinos in the area were also asked to contact the Philippine Embassy in Tripoli for assistance and instructions on the evacuation.

Libya has long been in wracked by unrest as rival groups vie for control, sparking fears of an all-out civil war.