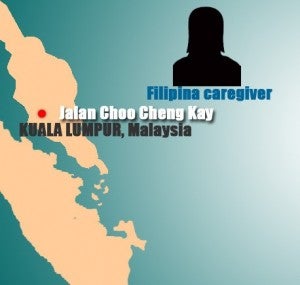 KUALA LUMPUR, Malaysia – A 44-year-old ticketing officer made a chilling discovery when she found her mother’s Filipino caregiver dead in the storeroom of her family’s flat along Jalan Choo Cheng Kay in Kampung Attap.

The ticketing officer had just returned from dinner with her older brother at 11p.m. on Thursday when she found the 34-year-old Filipina sprawled lifeless in the room, with a clothes iron lying nearby.

It is believed that she was bludgeoned to death with a blunt object.

A kitchen knife was found in the toilet bowl, but was believed to have been used to either threaten the victim or as a weapon of self-defense.

The ticketing officer’s brother, Alan Wong, who lives in a neighbouring unit, said he rushed out with a weapon when he heard his sister’s terrified scream.

“She told me that she had found ‘Remy’ dead in the storage room.,” he said, adding that their 75-year-old mother, a stroke patient, remained unharmed in the next room.

Wong explained that he and his sister left the building at approximately 9 p.m. to have dinner.

His sister, who was living with their mother and Remy, was surprised to find the door open with the lights in the flat switched off.

“As I entered my own unit, I saw a man squatting at the stairs outside but I didn’t think much of it.

“He disappeared after I went to help my family,” he added.

The live-in Filipina caregiver had been taking care of Wong’s incapacitated mother for 22 months. She leaves behind a 12-year-old son in the Philippines.

A witness who declined to be named said he heard people arguing in the flat as he was walking to a nearby stall for dinner with his friends at around 9:30 p.m.

Dang Wangi OCPD Asst Comm Zainuddin Ahmad, however, said it was as yet unclear whether an argument had taken place between Remy and her alleged killer or if they knew each other.

“We can only ascertain the motive behind the killing once we have recorded statements from all witnesses.

“We suspect that it could have been attempted robbery as the culprit had stolen Remy’s mobile phone and ransacked the lockers and the ticketing officer’s bedroom,” he said.

ACP Zainuddin added that there were no signs of forced entry.

“Due to her condition, we will not be able to record statements from Wong’s mother.

“However, we will continue to scour the area for evidence to assist in the investigation,” he said.

Body of pregnant Filipina killed by husband flown in from Malaysia