PH Muslims appeal for end to violence in Gaza 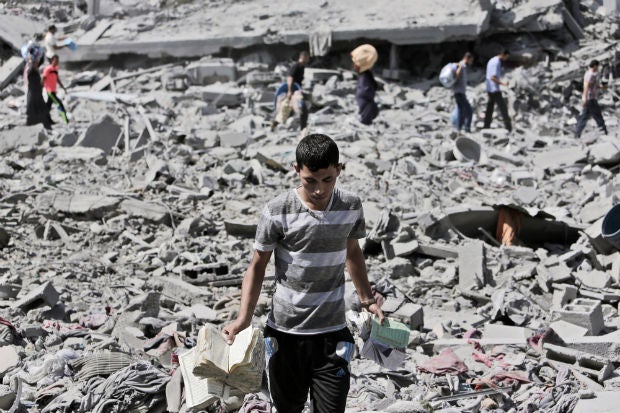 COTABATO CITY, Philippines – Muslims in Mindanao said the Eidl Fitr celebrations, which could start Monday in some areas, would not be as meaningful because of violence affecting Palestine.

Twenty-eight-year-old Nash Camo, a devout Muslim, said the Eidl Fitr celebrations would always be “painful” if the perceived persecution of Palestinians by Israel would not stop.

Camo, one of the more than 300 participants at Thursday’s fun run sponsored by the Autonomous Region in Muslim Mindanao (ARMM), said the celebrations would be meaningless as the casualty figure among Palestinians was mounting.

“More than 1,000 Gazans were killed, including mothers, children and obviously non-combatants while the Israelis suffered only about 37 or 40, there is imbalance, there is injustice and there is oppression, it must stop and it should be right now,” Camo, who ruled the male category of the fun run, said.

(Israel has said their missile attacks on Gaza have been justified by the stockpiling of Hamas — the dominant armed group in Palestine — of missiles and other weaponry — even in supposed-to-be civilian and neutral areas such as United Nations centers and schools. Israel has accused Palestinian militants of using civilians as human shields.)

Other Muslims in the Philippines described the Gaza offensive as “insanity of the highest order.”

On Friday, a congregational prayer was held near the Office of the Regional Governor building here, where hundreds of Muslims converged and asked for peace in Gaza.

Israel had agreed to a short ceasefire and was expected to resume offensive against what it said were Hamas’ positions in Gaza.

“We strongly condemn Israel’s ruthless offensive against the helpless people of Gaza and call for an end to its military occupation of Palestinian territories,” ARMM Gov. Mujiv Hataman said.

“Israel must, once and for all, uphold international laws and stop escalating its mounting war crimes. The illegal occupation and oppression of the Palestinian people continue to fuel an endless cycle of violence,” he added.

Rajah Buayan Mayor Zamzamin Ampatuan said the ceasefire that Israel and Hamas agreed to proved that talks would be able to end the violence in Gaza.

He said Tel Aviv and Ramallah should adopt what the late Palestinian leader Yasser Arafat had left as a legacy – the two-state solution.

Hataman said world leaders should also help pressure both sides so the slaughter of innocent civilians would stop.