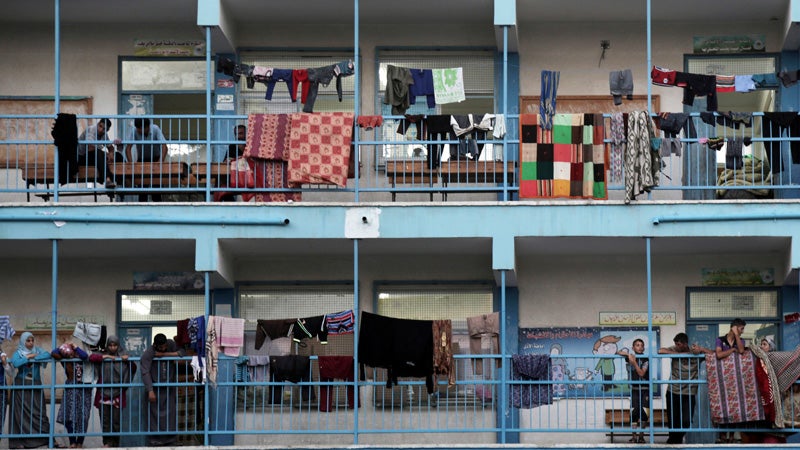 Palestinians stand along corridors at a United Nations school where hundreds of families have sought refuge after fleeing their homes following heavy Israeli forces’ strikes, in Jebaliya refugee camp, in the northern Gaza Strip, Friday, July 25, 2014. Over 140,000 Palestinians are seeking shelter in 83 UNRWA schools, according to UNRWA spokesman Chris Gunness. (AP Photo/Adel Hana)

MANILA, Philippines—As Filipinos in the Gaza strip have started to be evacuated to safety from Israeli missiles pounding the area, outgoing Israeli Ambassador to the Philippines Menashe Bar-On said his government would assist Filipinos who wanted to leave the Gaza Strip.

So far, 10 people—three Filipino mothers and some members of their families—have been evacuated to Jordan. There are about 120 Filipinos in Gaza, many of them married to Palestinians.

On Friday, the Department of Foreign Affairs raised alert level 2 in Israel and the West Bank where there are 36,000 Filipinos, barring them from non-essential movements there due to security threat posed on them by the conflict believed to be the worst violence in five years between Israel and Islamist Hamas.

Bar-On, in a visit to the Inquirer on Monday, reiterated his country’s position that it was just defending itself from the “criminals” in the Gaza strip who had been bombarding Israel with missiles daily for the past eight years.

Bar-On also came to say goodbye, saying he was set to leave the Philippines this week after a three-year tour of duty, A veteran diplomat of 45 years,  the ambassador said he was proud of projects implemented here that aimed to help Filipinos use Israeli technology to improve their lives and better prepare for natural calamities.

On the current conflict raging in the Gaza Strip between Israel and Palestine, Bar-On denounced “terrorist organization” that “hold Palestinians as human shields to achieve their goal, which is to destroy the State of Israel.”  He recalled that Israel left Gaza eight or nine years ago to heed the international community’s call for it to allow Palestinians to rule themselves.

But he said “terrorist organizations” in Gaza used the budget of the Palestinians to buy missiles and build tunnels that go all the way to a nearby Israeli kibbutz.

“Today we are targeting these terror organizations which for eight years have launched missiles every day (against Israel),” Bar-On said.

Wire reports on Friday said Israeli fire has pushed the Palestinian death toll in Gaza to above 800. Appalled at spiraling civilian casualties, United Nations secretary general Ban Ki-moon and other international leaders have called for an immediate ceasefire.

Justifying Israel’s actions, Bar-On referred to an incident in the 60s when then US President John F. Kennedy warned the then USSR (Union of Soviet Socialist Republics) against putting missiles in Cuba because this would be deemed a declaration of war against the United States. Israel, he said,  was facing a similar situation from their enemies in the Gaza strip.

“In a war, you have innocent people losing their lives especially when criminals use them as human shields. You can’t blame us,” Bar-On said.

This included the signing of an air agreement that would allow airlines from the two countries to make direct fights to each other’s capitals, boosting tourism in both countries.  He expressed optimism that Filipinos would be able to fly directly to Tel Aviv by December.

Bar-On was also proud of efforts of Israel to share its knowledge in agriculture and other technological fields to the Philippines through programs that included inviting agriculture students to visit Israel for a year to study and work with farmers in increasing productivity in agriculture.

The students, he related, were taught how to use greenhouses, how to grow “300 tons of tomatoes every year” and how to make a cow produce 40 liters a milk a day,’ among other things.

Bar-On also talked about Israel’s contribution to assisting victims of Typhoon Yolanda that caused much death and destruction in Luzon and the Visayas last year.

“We donated medical equipment to Bogo City in Cebu,” he said, adding he also turned more than half a million dollars worth of medicine to the Cebu governor. He said Israel was one of the first countries to respond to the disaster. A team of rescuers and medical people were also brought in.

He also said Israel also conducted disaster management workshops in Cebu and plans to do more of this to help people prepare for disasters.

“We will continue with these workshops and drills in November and December at the municipal and province level,” Bar-On said.

He underscored the need for closer coordination in relief and rehabilitation work, proposing that this be handled by one authority. “If each municipality works alone, then there is no management,” he added.