No Filipinos on crashed Taiwanese plane 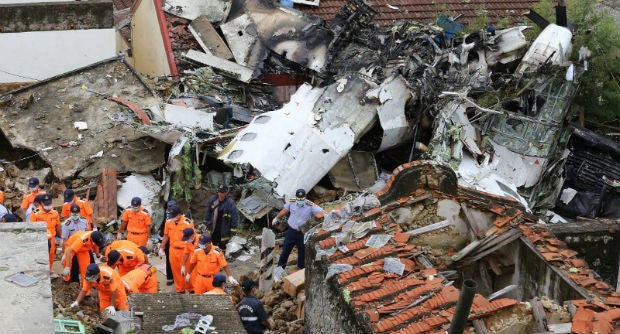 Rescue workers survey the wreckage of TransAsia Airways Flight GE222 which crashed on the Taiwanese island of Penghu Thursday, July 24, 2014. The plane attempting to land in stormy weather crashed on the island late Wednesday, killing more than 40 people and wrecking houses and cars on the ground. AP

MANILA, Philippines – No Filipinos were onboard the Taiwanese airplane that crashed Wednesday, the Department of Foreign Affairs (DFA) said.

“Our representative office in Taiwan has confirmed that there are no Filipinos on board the TransAsia plane that crashed Wednesday,” DFA spokesman Charles Jose said in a statement Thursday.

Forty-seven people were killed as the plane crashed while attempting a second landing after the first was aborted due to stormy weather.

The crash of flight GE222 was Taiwan’s first fatal air accident in 12 years and came after Typhoon Matmo (“Henry” in the Philippines) passed across the island, causing heavy rains that continued into Wednesday night.

Some 200 airline flights had been canceled earlier in the day due to rain and strong winds.

Taiwan battens down for Typhoon ‘Henry’