Taiwan battens down for Typhoon ‘Henry’ 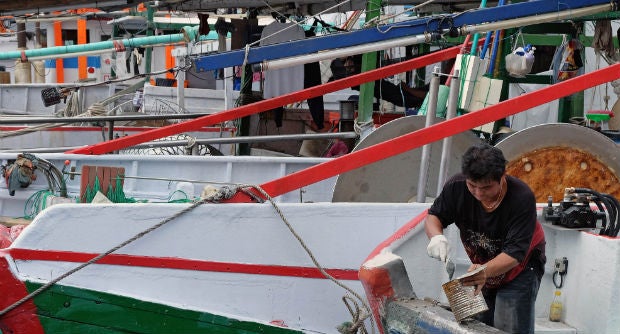 A worker hurries to finish painting part of a fishing boat tied up at Nanfangao harbor in Ilan county as Typhoon Matmo approaches eastern Taiwan on July 22, 2014. Typhoon Matmo churned towards Taiwan on July 22 picking up strength with thousands of tourists evacuated from outlying islands as weather forecasters warned of possible flash floods and landslides. AFP

Matmo, packing gusts of up to 173 kilometers per hour (107mph), is the first tropical storm to hit the island this year and is expected to make landfall on the northeast coast early Wednesday, the Central Weather Bureau said.

“Over the past three hours its strength has increased and its radius expanded,” an official at the bureau said.

“From now on until tomorrow, mountainous areas in the north and east are forecast to receive severe rainfall” of up to one meter, he said.

“People living in the mountainous areas ought to take precautions against possible landslides, and as flash flooding may happen people should stay away from low-lying areas.”

Around 5,400 tourists were evacuated from Green Island and Orchid Island, two popular scenic spots off the southeastern Taitung county.

The local government said shipping services between the two islets and Taitung were suspended from Tuesday for three days.

Several ports were packed with hundreds of fishing vessels that returned from sea following the typhoon alert.

Television images showed a huge crane lifting a giant inflatable rubber duck from a lake in the eastern Hualien county where it had been on display.

In 2009 Morakot, the worst storm to hit Taiwan in half a century, left more than 600 dead, including 400 people from Kaohsiung who were buried by mudslides triggered by torrential rains.

The disaster plunged President Ma Ying-jeou into his worst political crisis since taking office in May 2008, amid widespread public criticism that his government’s response was late and inefficient.