Fil-Am is behind Kwoller, the price-tracking mobile app for shoppers | Global News

Fil-Am is behind Kwoller, the price-tracking mobile app for shoppers 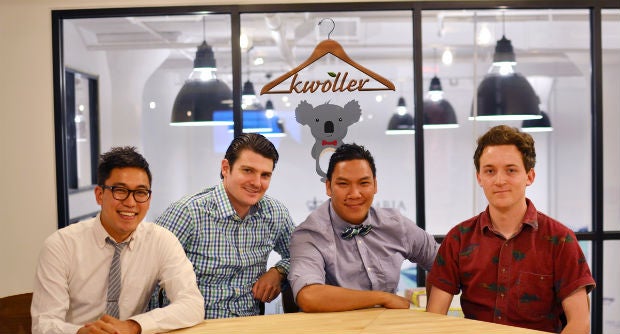 NEW YORK, New York — Finding a Filipino tech startup founder in the fastest-growing tech city in the world is like finding a needle in a haystack. More than 500 startup demonstrations in nearly two years led this writer to only three Filipinos, when every startup in the world is coming to present here.

The Philippines’ presence in tech entrepreneurship is certainly dismal, even if it’s earning praise for world-class web and app development, or living up to a consumer statistic as one of the top five Internet markets in the world, according to a study by Kleiner Perkins Caufield & Byers.

Then I found Filipino-American Tim Bernal, co-founder of kwoller.com, the Tinder-like price-tracking app for mobile shoppers. What should inspire Filipinos who say they don’t have a programming background is to just do what Bernal did: Learn how to build the iOS app himself.

It helps if you believe in yourself, which Bernal does in abundance. Where other startup founders are laid-back, even drawl when speaking, Bernal is hyper-articulate and confident with a strong stage presence that he demonstrated recently at one of the most prestigious pitching events, TechCrunch Disrupt NYC, and also at Ultra Light Startup this month.

In his 20s, Bernal was born in Pennsylvania and raised in Springfield, Virginia, to Filipino parents who graduated from the University of the Philippines. His father worked as a payroll manager before retiring, while his mother still works at Fannie Mae. He has an older brother.

Unlike other ethnicities, Filipino Americans leave little trace of their heritage when growing up. Many do not speak a Filipino dialect like Tim does, but there are certain things that stick with him, like eating rice all the time and having people take their shoes off when they enter his house. As for Filipino friends, he said, “My cousin Noel is my best friend.” Noel is also part of the five-member Kwoller team.

Bernal remembers being very ambitious and competitive even at a very young age. “In kindergarten, I often raised my hand to read sentences (from a book),” he said. Eventually, teachers would stop calling him, which he complained about with his family. It turned out that the teachers just wanted to give other kids an opportunity to speak up.

Bernal was very active in school. He ran cross-country, formed a band playing the trombone, acted in school plays and spoke in his high school graduation as the school’s valedictorian. “I liked being the best.” At Kwoller, he describes himself as “Chief Hustler.”

Bernal did consulting work after getting his college degree in commerce at the University of Virginia, interned at Amazon and later, immersed himself in the retail business at Kurt Salmon, working in operations and IT first. He was not a trained engineer, but he helped provide retail solutions. “You have to be able to take anything that comes to you and be methodical about it,” he said.

Working in a department store’s private label section, Bernal sat with designers and worked with manufacturers and mill suppliers. He helped select, centralize and implement systems.

The first time he thought of having his own startup was back in 2012. “I was amazed by what people we’re building. So it was either work at a startup or found my own.” He showed keen interest in e-commerce, which he shared with Brian Louko, roommate and classmate at Columbia Business School and co-founder of Kwoller.

“For two years since 2012, we thought of several businesses,” he said. They created a software platform that would sit on top of wearables, among other things.

When they saw the potential of mobile commerce, they created not just a shopping site, but also an “experience” with Kwoller. The two guys played up on their strengths: Bernal with his retail experience and love for shopping, Louko with his skill for hunting down good deals.

So in October 2013, Bernal and Louko brainstormed, created wireframes, showed hand-drawn screens to friends as they made every effort to improve the shopping experience via mobile. They were inspired by the simplicity of Tinder, the hugely popular online dating app with its easy swipe gesture. They thought there was room for something far simpler in the shopping app category.

In building the app himself, Bernal said he watched tutorials online. He also went to an iOS bootcamp and took some free courses at Turn to Tech. There was a six-week course for him to figure out how to create an app that he didn’t even need to finish. He likes the idea of building things himself.

Kwoller shows you choices to dislike (swipe left) and to order (swipe right). Other apps use push notifications to inform you of deals, whereas Kwoller is “very much a pull.” He thinks pull is a lot more powerful.

Bootstrapped, the app shows women’s clothes for now. Like any app, the challenge is how to get the word out and track everything using Flurry for its mobile analytics and improving its algorithm.

Kwoller, so-called because of a koala’s picky mentality, also bears some similarity to Snapchat, the app that makes photos disappear. With Kwoller, the item you swipe left can disappear, so it notes your dislikes. The more you like it should give you better recommendations.

For Bernal, what makes their app also shop-friendly is how it opens up right away for you to just shop, with no QR codes or any other distractions. Right now, the app is optimized only for the States, so if there’s an order from the Philippines, it’s up to the retailer to deliver an order.

But Tim’s story should deliver one thing clear to Filipinos in the States, even those from the Philippines: If he can do it, so can you.

Stopping overfishing in PH? There’s an app for that now