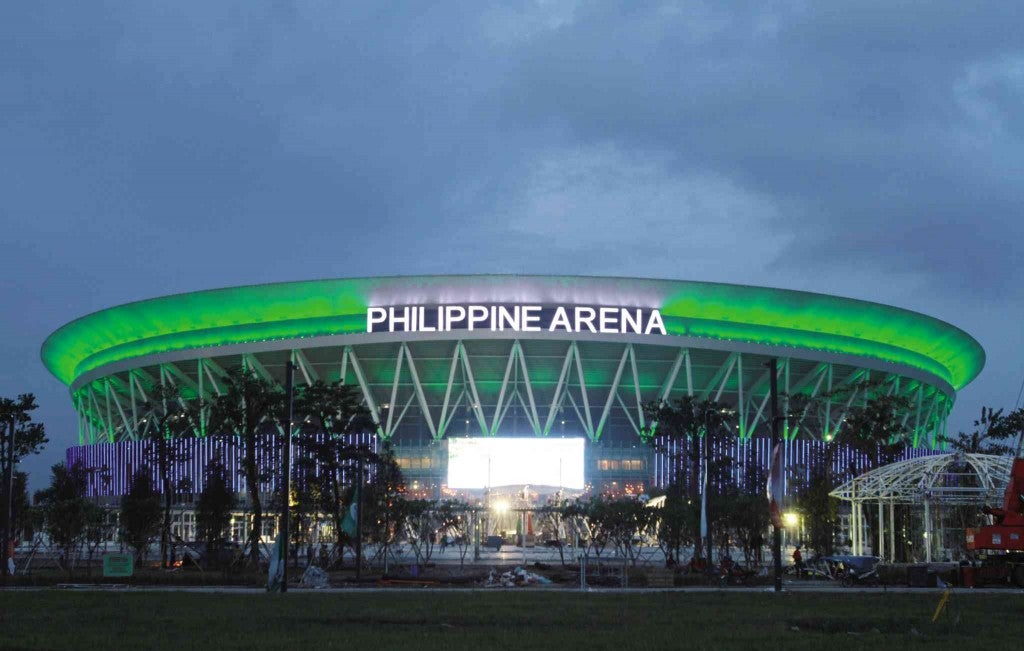 A ROUND OF APPLAUSE The Philippine Arena, 50-hectare complex called Ciudad de Victoria or City of Victory, in Bocaue town, Bulacan province, a domed indoor arena, is the centerpiece of the centennial projects of the Iglesia Ni Cristo (INC) for its grand celebration on July 27. All is set for its inauguration tomorrow, to be led by INC executive minister Eduardo V. Manalo. EDWIN BACASMAS

It’s all systems go for Monday’s inauguration of the Philippine Arena in Bocaue town, Bulacan province, “the world’s largest domed indoor arena,” which will be the main site of the centennial celebration of the Iglesia Ni Cristo (INC) on July 27 where more than 1 million of its members are expected to congregate.

Located in a 50-hectare complex called Ciudad de Victoria or City of Victory, which is part of the INC’s centennial project, it has a bowl-shaped structure inspired by the narra, the Philippine national tree, according to the world-acclaimed architectural firm Populous, its concept designer. The firm also designed the huge 23,000-seat O2 Arena in London, as well as various huge sports arenas and stadiums in the world.

The Philippine Arena is more than twice the size of The O2 in London and even of the large indoor arenas in the United States, which was why it was a big challenge to design and build. The Philippine Arena “pushed the boundaries of arena design” and is now considered the world’s largest indoor arena, Populous said in its website.

During its groundbreaking in August 2011, INC executive minister Eduardo V. Manalo said the arena and other massive architectural marvels to be built in the City of Victory had been designed to bring glory to God and honor to the country.

He said the Arena had already been envisioned even during the time of his father, the late INC executive minister Eraño G. Manalo, because of the need for very large venues for gatherings in view of the rapidly expanding church membership.

But Manalo said the Arena would also be open for use by Filipinos of other faiths and even by international groups or communities for international gatherings and events.

The INC hired the best companies to design, structure and build the Philippine Arena. Aside from Populous, it contracted Buro Happold, a British professional services firm, for its structural engineering and the Korean firm Hanwha Engineering and Construction for the completion of the project.

Even the site development of Ciudad de Victoria, particularly the Philippine Arena landscape, the Philippine Stadium Gardens and the Water Gardens around the Sports Center, would be done by one of the world’s best landscape firms, the multiawarded PWP Landscape Architecture.

PWP Landscape Architecture did the landscape of the National September 11 Memorial Museum (also known as the 9/11 Memorial and 9/11 Museum) in New York, which was built to commemorate the Sept. 11 attacks of 2001 in the United States, among other notable landscape projects worldwide.

Tomorrow, the INC executive minister will lead the unveiling of the marker for the entire Ciudad de Victoria, developed and built by the church through its registered educational institution, New Era University.  About 140 ha in total land area have been acquired in Bocaue and Santa Maria town in Bulacan for the future expansion of the tourism enterprise.

The INC said the construction of the Philippine Arena was made possible through the voluntary offerings of its members.

“This was built not only for the members of the Iglesia Ni Cristo, but for all the people. That is why it is called Philippine Arena.  Even if this is owned by the Iglesia Ni Cristo, Filipinos will benefit from it,” INC general auditor Glicerio B. Santos Jr. said of the Arena, which was featured by Discovery Channel in December last year.

He said it would not only be the Philippine Arena but the whole Ciudad de Victoria complex that would be inaugurated on Monday.

The Arena was designed and built to withstand strong earthquakes and supertyphoon winds, and had in fact withstood the 150-to-185-kph winds of Typhoon “Glenda” (international name: Rammasun) that hit Metro Manila and several provinces, including Bulacan, on Wednesday.

With a dome spanning over 3.6 ha, it has been hailed as a modern marvel of architecture and engineering. It stands on a 4-ha area in Ciudad de Victoria.

The master plan was to gather 50,000 people inside the building and another 50,000 at a “live site” outside to share in major events, Populous said.

“This vast scale creates technical challenges, especially as it is a one-sided bowl. It is difficult to have 50,000 people with one focal point, give everyone a good view and create a sense of atmosphere,” it said.

Inside the Philippine Arena, there is a clear “line of sight” for every seat from each tier, even for various arena configurations such as church ceremonies, boxing, tennis, concerts or indoor gymnastics. The whole arena is completely air-conditioned.

Populous said “another challenge is to retain intimacy and make sure the arena never feels empty.”

“The lower bowl will be the most frequently used part of the building and the design allows for easy separation of the lower bowl from the upper tier, by curtaining with acoustic and thermal properties,” it said.

“The building has also been designed to cope with large numbers arriving for an event simultaneously,” Populous said.

The arena will not only hold major church gatherings, it will also operate as a multiuse sports and concert venue, capable of holding a range of events from boxing and basketball to live music performances.

The INC, which has grown from a handful of members when it was registered in the Philippines on July 27, 1914, has expanded to more than 100 countries. Its members now come from 110 races around the world, scattered across six continents.