How to keep music playing when bodies have fallen 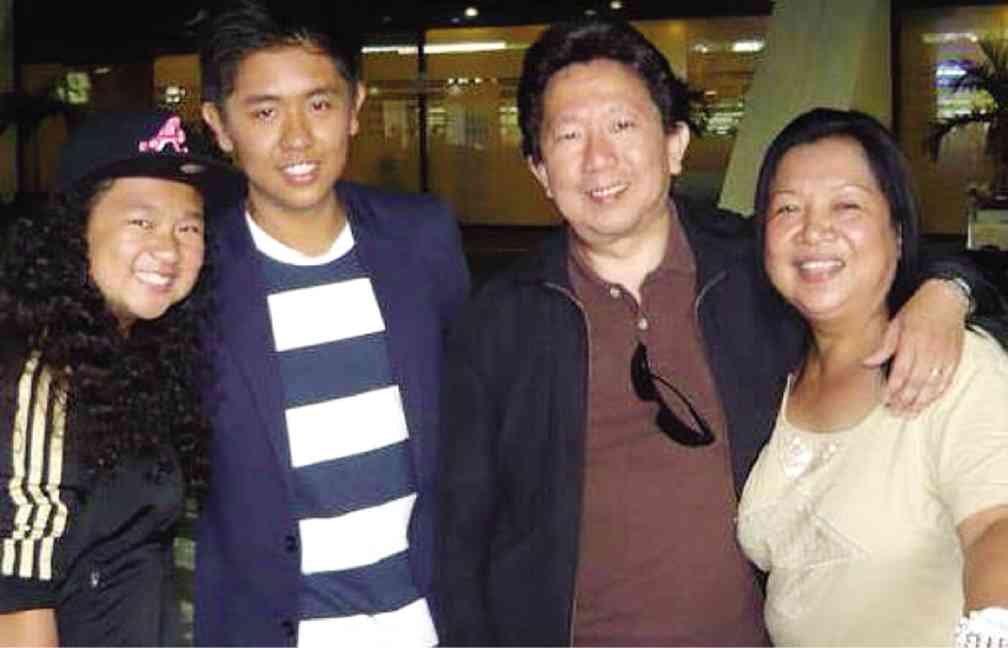 “THANK YOU FOR THE MUSIC,” a good friend posted on Facebook to express love for Budy Gunawan and his family. (From left) Sherryl Shania, 20, Darryl Dwight, 15, and wife Irene Pabellon, from Quezon originally. FACEBOOK PHOTO

QUEZON, Philippines—The annual reunion of the huge Pabellon clan in Pagbilao town next week will not be a riotous musical affair as planned because the star of the family will not be around.

“Instead of endless singing and dancing, the reunion will be a tearful moment of family prayers for the family of our beloved Nini and her family,” Tirso Pabellon, elder brother of Irene Pabellon-Gunawan, told the Inquirer in an interview at the family’s two-story house on “Kalye Heaven” in the middle-class neighborhood of Bucal on Saturday morning.

Fifty-three-year-old Irene, or “Nini” to her siblings, her Indonesian husband Budy Janto Gunawan and their children Darryl Dwight, 20 and Sherryl Shania, 15, were among the 298 people aboard the Malaysia Airlines jet liner that was shot down near the Russian border in strife-torn eastern Ukraine on Thursday.

“The family even brought with them their musical instruments. All of us are eagerly waiting for the reunion day because Nini promised us that it would be a blast,” he said.

Tirso said his nephew Daryl Dwight, a medical student and a popular “disc jockey” in the Netherlands had also promised to bring his “gears” to show his talent to his relatives here.

“But the big party will never come. The main star is now gone,” Tirso said, holding back tears.

He learned about the tragic event from a relative who dropped by shortly before noon Friday.

“I even kidded him asking what good news he had for me. When he informed me of the incident, I held back my tears to fight off the sad truth,” he said.

Tirso said he had just ordered leche flan and budin (sweet cassava cake) for Irene, who had especially requested the treats for her homecoming.

Moments later, Tirso’s youngest sister, who also lives in the Netherlands, called and confirmed the incident.

Irene and her husband last visited the Philippines in May to bury her mother who died after a lingering illness.

The Pabellon patriarch died when Irene was still in high school.

Tirso said that when the news of the incident reached the family, Irene’s best friend in high school was already waiting at Ninoy Aquino International Airport in Manila to fetch the Gunawans, who were scheduled to arrive at 2 p.m.

A single candle was left lighted at the grotto of the compound in memory of the Gunawans.

Neighbors and relatives came to offer their condolences to Tirso and his family.

Tirso described his late younger sister—the fifth in a brood of six—as the breadwinner of the family. Two of the elder siblings had died from illness.

“Nini never failed to help us and our relatives who were in need. Even my brother-in-law was also very kind and generous to all of us here,” Tirso said.

The Pabellon house stands on a 180-square-meter property owned by the family’s matriarch. It was built with money that Irene earned from her overseas job, said Tirso, a former welder who quit his job because of illness.

Tirso and his family moved in after their mother died.

Tirso’s son, Ronel John, 19, who had just graduated from a mariners school, was also devastated when he learned about his aunt’s untimely demise.

“I remember her promise that she will help me find a job overseas once I finish my studies. Now she’s gone, I don’t know what will happen next,” he said, blinking away tears while holding a copy of the Inquirer’s Saturday edition that carried news of the downing of Malaysia Airlines Flight MH17 in Ukraine.

Tirso said that during the Gunawans’ annual visits, they never failed to bring close family members to shopping sprees.

“They always told us to just look at the goods that we wanted and not at the price tags,” he said.

Ronel John also remembered the generosity of his cousin Darryl Dwight on his last visit, in 2011.

“We stayed in the mall from opening to closing. He paid for all the items that I bought. He was really kind. We really had a good and memorable time together,” he said.

Tirso recalled that Irene, as a fresh high school graduate, traveled to Japan in the late 1970s to perform as drummer and lead vocalist in a band of local musicians.

Tirso said Irene, then still a minor, tampered with her birth certificate to get the government papers she needed for the job.

“She’s a gifted musician and talented singer. She could play almost all kinds of musical instruments. She entertained the family at every gathering with her beautiful voice and musical artistry,” Tirso said.

After several years in Japan, Irene bagged a contract for another job as musician in the Netherlands.

It was during her Dutch gig with Filipino and foreign musicians that Irene met Budy, a musician from Indonesia who played lead guitar.

They got married sometime in the 1980s—Tirso could not recall the exact date—and Irene had to drop music to raise a family.

But she found another job, which Tirso also could not recall.

“But Budy continued to perform and at the same time went to college to secure the future of his family,” Tirso said.

After college, Budy found work with Malaysia Airlines. “I think he was a supervisor. He handled lots of men,” Tirso said. “That’s why they could always travel here and visit us, courtesy of the airline,” he said.

Irene found jobs for her two sisters in the Netherlands.

Tirso said their eldest, Lynda, worked in the Netherlands for 15 years before returning to Pagbilao with her Filipino husband, a migrant worker she had met there.

Irene found an office job for Lilia, her youngest sister, in the Netherlands. Lilia married a Dutchman and settled there for good.

“It’s good that she did not plan to attend the reunion. She could have been on the same flight,” Tirso’s wife said.

Tirso said he and Lynda would fly to the Netherlands for the funeral of Irene and her family.

US: Russia behind crash