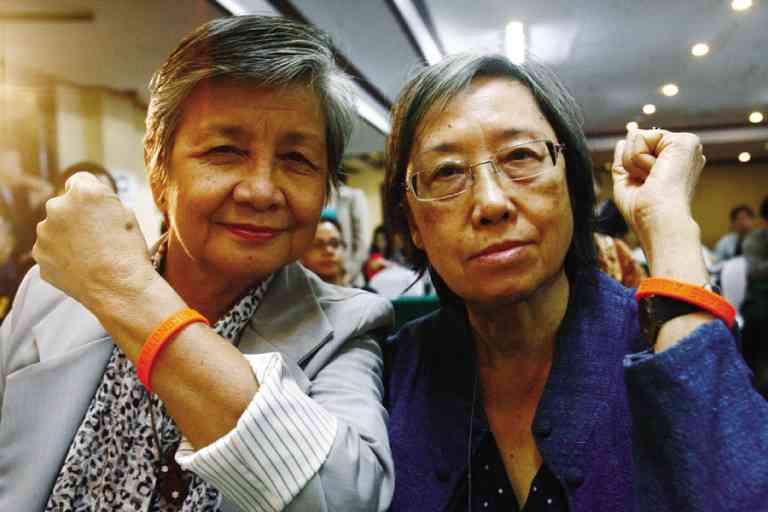 They are two hearts missing a part, brought together by the same goal: That someday, no mother, wife, friend or family member would experience the same uncertainty and “torture” they continue to endure for losing a loved one.

The moment seemed like a culmination, a fated crossing of paths between the two women who have made it their life’s mission to search for the missing, raise awareness about the families who miss them and call for global action against enforced disappearances.

“We were brought together. I do not believe in accidents or coincidences. I believe everything is providence. God puts you there because there’s something you can do and something good will come out of it. That’s how I look at it,” Burgos told the Inquirer.

Both were participating in an international conference on psychosocial support for families of the disappeared, an event mounted in Manila by the Asian Federation Against Involuntary Disappearances. The federation of regional human rights groups was founded in the Philippines in 1998.

“I have heard about that case and I have been praying for her …. When I came into the room, she was very gracious. I introduced myself, and then I saw her name and told her, ‘I’m sorry I didn’t recognize you right away,’” Burgos said, recounting her first meeting with Ng on Thursday morning at the Bayview Park Hotel Manila.

They were to stay in the same space together for the next four days.

For Burgos, listening to Ng’s account at the conference proved to be a painful throwback.

“When she started to talk about [what happened to her husband], it’s difficult to hear. It’s as if her heart breaks a little every day. When I heard her, it was like a flashback. I felt so much for her,” said Burgos who, like Ng, has traveled to different parts of the world to pursue the cause.

Ng, also a development worker formerly of the United Nations Children’s Fund (Unicef), lost her husband of 30 years to unidentified men on the evening of Dec. 15, 2012, as he drove home in his native Vientane. CCTV footage showed that he was abducted after being stopped by police officers.

Burgos is still searching for her son Jonas, an activist who was taken while he was having lunch at a Quezon City mall on April 28, 2007.

She believes the military is behind her son’s disappearance and has successfully petitioned the Supreme Court to compel the Armed Forces to produce soldiers involved in the abduction, based on evidence.

Ng, on the other hand, said she does not want to speculate on state involvement and hoped “that they will sincerely try and find Sombath and return him.”

Over the first breakfast they shared together on July 17, Ng, 67, readily sought the counsel of Burgos, 70, like a younger sister seeking the wisdom of someone who has been there first.

“She asked me, ‘How do you cope?’ Because she is not yet there,” said Burgos, “there” being a place really hard to define but recognizable once reached.

“Because me, with my family, we have done so much that I can no longer say we never did anything. I’ve exhausted everything, and we’re still doing more. You get a sense of knowing that there is nothing else I can do but I’m still here …. And that awareness helps,” Burgos said.

As for Ng, the pain of not knowing remains fresh, like a wound that gapes a little wider every day.

“It’s been a personal tragedy. The family—everybody is traumatized. The uncertainty as to what happened to him is the greatest pain one suffers. It’s like a kind of suffering that has no end, has no closure,” said Ng, who shares the ordeal with Somphone’s siblings (they do not have a child).

“Every waking moment, you have to deal with it. You wonder what has happened to him, where he is, what is his situation. It is very difficult to even comprehend for those people who have not experienced. It’s like a wound that never heals,” she told the Inquirer.

It was a more difficult time for the family just a month ago when Somphone’s mother Chom died without ever seeing her missing son again. She was 86.

“His mother just passed away almost exactly 18 months after his disappearance, so [that was] just last month. She was pining for him, just hoping to see him one last time. So it is a pain that the entire family has to bear,” Ng said.

She said her mother-in-law tried to hang on even as her health quickly deteriorated over the last six months.

“She was not well for six months. I believe she hung on hoping she would see him one last time … . Even though she was old, she was healthy and sprightly. But her health just deteriorated after [Somphone’s disappearance],” Ng said.

Until today, Ng did not have the slightest idea why anyone would want to harm her husband, a gentle-mannered advocate of sustainable, simple and spiritual lifestyle whose work won for him the coveted Magsaysay Award for Community Leadership in 2005.

Somphone, 64, is also known for introducing in Laos the concept of Gross National Happiness (GNH), a Bhutan-led movement that hopes to spread the Buddhist teaching of valuing happiness more than material achievement. GNH measures a nation’s quality of life through the well-being of its citizens and not merely through economic gains, as does the Gross National Product.

“I don’t know [the motive]. I have no real evidence because the people who took him did not say anything, and you know all his life he has lived a very upright life. All he wants to do is to work on projects that help the rural poor, work with young people, build their capacities, help them to live a bright life,” Ng said.

“This is so new. Nobody chooses to have somebody disappear from their life. Nobody chooses to have their loved ones disappear. When it happened, it’s like I’ve been hit by a bolt of lightning, that you don’t even know where it came from. What goes on in your head is why, why did it happen? Why should it happen to me? What did he do wrong? In the case of Sombath, he has not done anything wrong,” she said.

She described her husband’s life as one of peace and harmony with not just his fellow men, but “with every living creature.” Spirituality, she said, is at Somphone’s very core. Such example is what Ng has turned to at this dark time in her life.

“Sombath is a very spiritual person and he practiced a lot of meditation himself. He always tried to teach me or urge me to practice. I wasn’t very serious, but now I find that I need to go back to his way of thinking, and to follow his example to help calm myself, to help me to cope,” Ng said.

She encapsulated her husband’s teaching in a line: “In a situation where it seems so completely incomprehensible, the only solace sometimes seems to be spiritual help.”

In a way, Somphone continues to be there with his wife through his words, just as he would when he was still around, during times when Ng was down.

“When I was depressed, he was a very optimistic person, so he helped bring me back. [He made sure] that I don’t only think about the negative side of things. He always said to look at the positive side. Yes, there are a lot of problems, issues in the world. We can’t solve them all, but we just do whatever little bit that we can and take comfort and take blessings that there are many good things going on around us,” Ng said.

Waking up with pain

Fueled by her search for answers despite the growing emotional toll, Ng has been traveling the world to campaign for her husband’s return, gaining the support of her native Singapore, the United States and the European Union in pressing decisive action of the Lao government to surface the missing civic leader.

Her mission has also brought her to Japan, Thailand and Indonesia.

As for Burgos, the unanswered questions over her son’s disappearance had brought her to a place of higher purpose.

That her son remains missing for seven years is “part of a bigger plan,” Burgos believes, relying on her faith solidified by such experience. She said she had moved on from the time when she drew from raw emotion, those early years when she would shout with clenched fists for the state to “surface my son alive!”

God’s will for a purpose

“My faith tells me that maybe it is God’s will that I will never find him. If it is His plan that we will never find Jonas, then I’ll have to follow God’s will. This is part of a bigger plan, and that is to help victims of enforced disappearances, and not just Jonas,” said Burgos, her hair grayer but her demeanor calmer.

As they treaded a similar path albeit five years apart, Burgos said she did not want “to be presumptuous that I’m better off.”

“Maybe just to be present to her, just embrace her, that’s enough. She lost someone. I lost someone. If we just hug, that’s already something,” Burgos said.

‘If we find the truth, we find Jonas too’