Filipino in LA gets 25 years to life for murdering wife 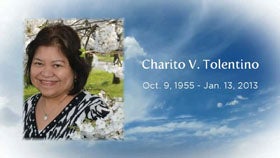 SAN FRANCISCO, California — A 62-year-old Filipino was sentenced Tuesday (July 8) by a Los Angeles Superior Court judge to 25 years to life in a state prison for the murder of his wife.

Additionally, Infante was ordered to pay $5,000 to the Victim Assistance program.

A jury last month found Infante guilty in the first-degree murder of his wife, Charito Tolentino, 57.

Deputy District Attorney Miriam Avalos, who prosecuted the case, said at the time of the killing, Infante was having an affair. When Infante’s girlfriend learned he was married, she broke up with him, Avalos said.

A day after the breakup, Avalos said, Tolentino went missing. Two days later, on Jan. 13, 2013, her car was discovered in the parking lot of the Hawaiian Gardens Casino. Law enforcement found her body in the trunk of the car. She had been stabbed and beaten to death.

Homicide investigators said Infante killed Tolentino in the family home’s garage and later stuffed her body in the luggage compartment of her red Toyota RAV4 with the help of his son from a previous marriage. The vehicle was later found 20 miles away at the casino parking lot.

The son later testified in court against Infante. Grieving relatives expressed relief at the maximum life sentence meted out to Infante.

“Charito will be at peace and she got the justice that she deserved,” Leticia Tolentino Macalalad, Charito’s sister told Balitang America’s Steve Angeles.

“We’re happy with the outcome, but that does not bring back our Tita Baby, so definitely happy about the verdict and sentencing, but we’re still sad,” said nephew Nozelle Tolentino.

During Tuesday’s sentencing hearing, Tolentino’s sister and nephew read a series of emotional statements given to the court by family members.

They described how the late nurse had unselfishly helped family members who immigrated from the Philippines to the US.

They said it was Tolentino who helped pave the way for Infante to get his US citizenship and petitioned his children from a previous marriage.

“She was the rock of the family, she was the glue, she always was very generous, very helpful at times, always a giving person,” Nozelle said. “It’s just sad that somebody that good was taken away from us.”

Relatives said Infante, who they said had a problem keeping jobs, took advantage of Tolentino’s kindness.

They said Infante used his wife’s income to support his gambling and to finance failed businesses.

Leticia recalled from her talks with Charito and reading from her late sister’s diary, that Infante would steal money from her wallet to gamble with friends and that he had converted the family’s garage into a gambling den.

A local newspaper, San Gabriel Valley Tribune, reported that Infante even hosted a poker game a few hours at the garage after he killed Tolentino.

Investigators believed Tolentino was killed when she came home after her graveyard shift at St. Vincent Medical Center in Los Angeles.

The couple lived with their then 17-year-old daughter in the 1100 block of Hollenbeck Avenue in West Covina.

Filipino in LA faces life for killing his wife