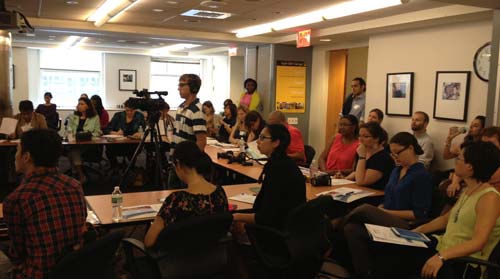 NEW YORK — As Carolina Solano follows the mounting crisis on the southern border, her maternal instincts tell her to protect the unaccompanied migrant children streaming into the United States from Central America.

“I just feel very sad about the children,” said Solano, an immigrant from Honduras. “It is such a huge risk just to get reunited with their parents.”

“I’m a parent. I can truly understand why these parents would decide to do that [ask their children to cross into the U.S.],” Solano said. “It is not very safe in many parts of Central America.”

But, she added, as a newly naturalized U.S. citizen she is grateful that she can petition her immediate relatives — and not have to face the choice confronting many Central American parents.

Yet, despite the advantages of naturalization, only 8.6 percent of more than 8 million eligible immigrants in the United States actually apply for citizenship each year, according to the Migration Policy Institute’s latest figures,.

Solano, 45, fled the violence of Honduras and moved to the United States when she was in her 20s. She became a legal permanent resident in 2005.

“I now have a voice. I can elect government officials who will help the people from my community, including many of those undocumented kids on the border,” she said at a citizenship briefing organized by New America Media in New York last week.

In New York City alone, about 1.2 million legal permanent residents are currently eligible to apply – with another 2.5 million soon to become eligible, according to Julissa Gutierrez of the National Association of Latino Elected and Appointed Officials (NALEO).

“The diversity of our applicants reflects the diversity of the city,” said Gutierrez, whose organization is one of several national groups advocating for citizenship as part of the New Americans Campaign (NAC).

“I remember growing up and seeing my parents reading Indian newspapers, and that was how they got connected to the community,” recalled New York City Commissioner of Immigrant Affairs Nisha Agarwal.

Speaking at the June 30 briefing, which drew both advocates and ethnic media journalists, she acknowledged the role that ethnic media plays in mobilizing communities and challenged those in the audience with helping to increase the number of applicants.

“Our collaboration with ethnic media is absolutely critical to achieve this mission,” she said.

Others in the room raised concerns about recent changes to the application form itself, known as an N400. In May, the form increased from 10 to 21 pages in length.

Tamara Bloom is legal coordinator for CUNY Citizenship Now! She explained that U.S. Customs and Immigration Services (USCIS) gave the public notice of the change far in advance.

There was ”a lot of confusion about the old application form,” said Bloom. “This time, there is a much greater clarity not just for the applicants but also for USCIS.”

As an example, she pointed to the fact that the new form does not require applicants to list countries they had visited within the past ten years, saying that for some, the challenge to applying for citizenship “is really not about the fee or eligibility … but about figuring out past travels.”

Bloom added that help is available for those who remain confused by the new forms, or who cannot afford the fees.

It currently costs $680 to file for citizenship, but immigrants whose income falls below the federal poverty level qualify for a fee waiver. Those with limited English proficiency may also qualify to take the exam in their native language.

Dorla Wright moved to the United States from her native Belize with her siblings more than three decades ago. After five years as a green card holder, she could have applied for U.S. citizenship.

Instead, she deliberately did not apply. She thought having a green card was enough to hold a job, maintain her family’s apartment in Manhattan and have an opportunity to travel abroad from time to time.

“I thought I was already living the American Dream,” said Wright, now 50. “But I didn’t realize the opportunities that I wasted for many, many years.”

It’s a mindset – one that sees the benefits of permanent residency as akin to those afforded to U.S citizens – that advocates of U.S. citizenship would like to change.

Angela Fernandez, executive director of the Northern Manhattan Coalition for Immigrant Rights, said immigrants should know the differences in benefits are enormous.

“U.S. citizens can stay abroad for an extended period of time. They can also hold federal jobs,” she said. “Citizens of this country can also petition immediate family members— and it moves quicker as compared to a petition made by a green card holder.”

Another benefit of having a U.S. passport, Fernandez added, is that citizens cannot be barred from entering the country or get deported.

New drive launched to raise number of US citizenship applicants