New drive launched to raise number of US citizenship applicants 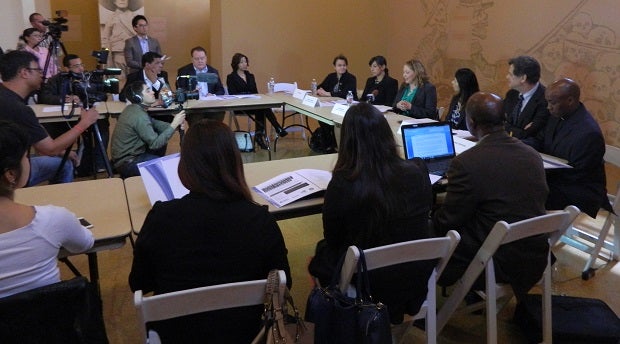 LOS ANGELES, California – Only eight percent of eligible immigrants apply for US citizenship every year, according to Linda Lopez, chief of immigrant affairs the Los Angeles Mayor’s office.

Lopez and representatives of various immigrant advocacy groups expressed concern over the low naturalization rate. They announced on March 21 a new drive in partnership with the Los Angeles Public Library called the New Americans Campaign to encourage more applications for citizenship.

A panel of speakers agreed that challenges such as lack of information and language barriers must be overcome in order to increase the number of people applying for naturalization. The roundtable discussion was hosted by New America Media.

Based on the 2010 Los Angeles Naturalization Statistics, out of the 8.5 million who are eligible for naturalization in the country, 3.4 million live in California with nearly half residing in Los Angeles. 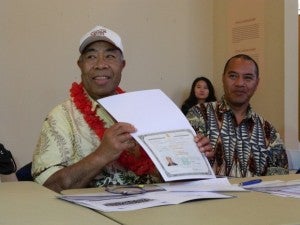 Sione Vanisi, who was afraid to become a US citizen at first, holds up his citizenship certificate

Mexico has the largest population of legal residents in LA County who have not chosen to be naturalized– 504,455 immigrants — while the Philippines is third with 47,617.

One of the main reasons why permanent residents do not apply for citizenship is the huge fee. According to Elisa Sequiera, California director of civic engagement for the National Association of Latino Elected and Appointed Officials (NALEO), the citizenship fee of $680 for multiple members of the family can be overwhelming for most applicants.

If families are unable to shoulder the payment, there are ways to pay for the fee, such as filing an I-912 to qualify for a fee waiver, and applying for a loan through the state or a private institution.

Another reason for low citizenship applications is the lack of information about the incentives of being an American citizen. Aside from the getting the right to vote and petition loved ones, being a citizen provides a true sense of security.

“For many of us, this is the first time we’re really experiencing freedom. We have the right to make an impact in our community and travel without fear,” Sequiera said.

For Guadalupe Guerrero, her father’s decision to become a US citizen gave her and her sisters a chance to attend universities.

“Paying for school ourselves really made him think; he had the opportunity to be a citizen and provide us with more chances to really be able to make our dreams come true,” Guerrero said.

Applying for a US Citizenship also made Sione Vanisi, a Tonga native, think that he would give up all ties to his home country. “I was afraid that I’d lose my land,” Vanisi said.

Instead, he applied for dual citizenship at the age of 71 and remains proud of both his countries.

Nasim Khansari, citizenship network manager for Asian Americans Advancing Justice, encouraged immigrants to apply now because in May, the citizenship form will be doubled from 10 to 21 pages because of additional questions regarding torture, genocide and child soldiering.

For more information on applying for citizenship, there will be a free citizenship workshop for green card holders on Saturday, March 29 from 11 am to 1 pm at the LA Central Library, Mark Taper Auditorium. The library is located on 630 W. 5th St.