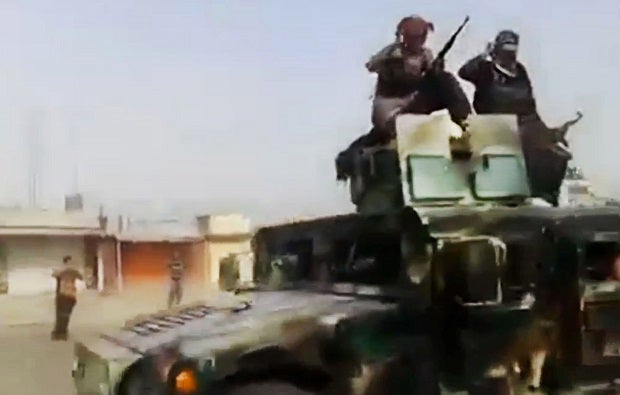 In this Tuesday, June 17, 2014 image taken from video uploaded to a militant social media account, which has been authenticated based on its contents and other AP reporting, al-Qaida-inspired Islamic State of Iraq and the Levant militants arrive to the countrys largest oil refinery in Beiji, some 250 kilometers (155 miles) north of the capital, Baghdad, Iraq. Iraqi security forces battled insurgents targeting the countrys main oil refinery and said they regained partial control of a city near the Syrian border Wednesday, trying to blunt a weeklong offensive by Sunni militants who diplomats fear may have also seized some 100 foreign workers. AP

MANILA, Philippines—The Department of Foreign Affairs (DFA) has raised crisis alert level 4 in Iraq, paving the way for the implementation of mandatory evacuation.

“Due to the rapidly deteriorating security situation in Iraq, the

Department of Foreign Affairs has raised the crisis alert level for all areas in Iraq to Alert Level 4 (Mandatory Repatriation),” DFA spokesman Charles Jose said in a press conference Thursday.

“Except for the Iraqi Kurdistan Region, which remains under Alert Level 1 (Precautionary Phase), Kurdistan remains relatively calm and stable,” he said.

Iraq is faced with a growing insurgency by an armed group that calls itself ISIL (Islamic State in Iraq and the Levant) that has captured and controlled various towns around the capital city of Baghdad.

Fierce gun fights were reported in Iraq’s largest oil refinery in the town of Baiji, 130 miles north of Baghdad, as the militants tried to capture it Wednesday.

US President Barack Obama has deployed 275 soldiers to Baghdad in order to protect the US embassy there from the rebel group.

autonomous region of Kurdistan in the northern part of the country.

“Around 154 Filipinos are in the Iraq capital of Baghdad,” Jose said.

“Filipinos in Iraq will be assisted by the Philippine Embassy in Baghdad and the Rapid Response Team, which are currently undertaking registration of overseas Filipino workers for repatriation. The DFA continues to closely monitor the political and security developments in Iraq,” he said.

DFA deploys team in Iraq to speed up repatriation of Filipinos

Read Next
PH Air Force set to receive new aircraft
EDITORS' PICK
IATF: Food firms to operate with 50% of workforce during Luzon quarantine
BREAKING: 1,075 people in PH has coronavirus disease – DOH
Style and music journeys with Claudia Barretto
UP-PGH wards for COVID-19 patients finished in 5 days
Cebu City closes its borders
DILG to stranded workers: ‘Stay where you are’ until Luzon-wide quarantine is over
MOST READ
Tootsy Angara bares neighbor wanted them out of village
593 health volunteers sign up to fight COVID-19, says DOH
UP-PGH wards for COVID-19 patients finished in 5 days
No more bread? Company forced to limit production
Don't miss out on the latest news and information.