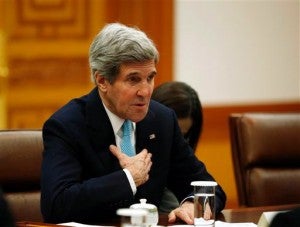 BEIJING—China’s claim to almost the whole of the South China Sea is “problematic” and the Asian giant’s actions have raised tensions, a senior US official said on Tuesday on the eve of high-stakes talks.

China also disputes islands with Japan, a US security ally that Washington is treaty-bound to defend if attacked. Officials traveling with US Secretary of State John Kerry said they had “heightened concerns” about “the readiness of claimants to utilize military, paramilitary, coast guard forces in furtherance of their claims.”

Kerry arrived in Beijing on Tuesday for the sixth Strategic and Economic Dialogue, billed as the main annual meeting between the world’s two largest economies.

The two days of tough discussions will seek to chart a path ahead in turbulent China-US ties roiled by differences over Asia-Pacific maritime tensions, Internet hacking and trade issues.

China’s claim to the strategic South China Sea also claimed in part by the Philippines and Vietnam, among other Asian countries, is based on a line drawn on 20th century maps.

“The ambiguity associated with the nine-dash line is problematic,” said a US official traveling with Kerry.

The Philippines, a US treaty ally, has questioned China’s claim in the United Nations International Tribunal for the Law of the Sea, and the court has ordered Beijing to comment on Manila’s case by Dec. 15.

Beijing has refused to take part in the arbitration proceedings and instead passed a law increasing protection of its military installations and territorial claims in the South China Sea.

The new law enacted last week by the Standing Committee of the National People’s Congress will take effect on Aug. 1 and is believed to be aimed at Japan, Vietnam and the Philippines, all of which refuse to recognize China’s claim to nearly all of the South China Sea.

Manila on Tuesday said it was studying the new Chinese law and its implications to the Philippines’ territorial claims in the West Philippine Sea, part of the South China Sea within the country’s 370-kilometer exclusive economic zone.

“We are still studying the new law and its possible implications … on the Philippines’ territorial claims and sovereignty. [B]ut having said that, we reiterate the Philippines has sovereign rights and jurisdiction in the West Philippine Sea,” Charles Jose, spokesman for the Department of Foreign Affairs, said on Tuesday.

China and its neighbors have stepped up their patrols of disputed areas, and recent spats in the South China Sea have led to boats ramming each other, the use of water cannon and arrests of fishermen.

The heightened tensions are “very relevant to the United States as a Pacific power, as a major trading nation, as an important consumer of the sea-lanes and as a long-term guarantor of stability in the Asia-Pacific region,” said the senior US administration official.

The official spoke anonymously in order to discuss the talks frankly, and added that the dialogue would be held in “a very direct, candid and constructive way.”

The United States stresses that it takes no sides in the territorial claims, but has accused Beijing of destabilizing acts and urged it to uphold freedom of navigation in the key waterways.

China has said it is committed to diplomatic, peaceful means to deal with the claims, the US official said. “We want China to honor that and live up to its word.”

Other issues high on the agenda include nuclear-armed North Korea, following a “significant” visit last week by Chinese President Xi Jinping to Seoul.

“There is a steady convergence in the views between the United States and China on both the importance and the urgency in moving North Korea to take irreversible steps to denuclearize,” said the US official.

But while Beijing’s patience with the brinkmanship of its wayward, unpredictable ally appears to be wearing thin, it has not publicly shown any willingness to take any action toward the regime.

Kerry is to meet with Xi on Thursday.

Chen Zeguang, China’s assistant foreign minister, said on Monday that the United States “has made some wrong remarks and acts on maritime issues and cyberissues, bringing negative impact on bilateral relations.”

“We are committed to working with the US side to advance such a relationship,” Chen told reporters in Beijing. “To achieve this objective, the most important thing is that we should not see confrontation or conflicts.”

Despite the Obama administration’s “pivot” to Asia, already fraught US-China relations have strained further since Washington in May indicted five Chinese military officers for hacking into US businesses.

“Chinese actors … stole corporate or proprietary information … and transferred it to state-owned enterprises for the purpose of commercializing it,” said the US official.

Although analysts saw the charges as a largely symbolic warning to Beijing since the men are unlikely to appear in a US court, China angrily canceled key cybersecurity talks due this week.

Kerry, accompanied by Treasury Secretary Jacob Lew and a large US team, will seek to persuade their Chinese counterparts, led by State Councilor Yang Jiechi and Vice Premier Wang Yang, to reinstate the working group to draw up rules for using and protecting the Internet.

As arguably the two largest users of cyberspace “we share an interest in a secure, predictable and orderly cyber environment,” said the US official.

Chen on Monday dismissed the charges against the five Chinese officers as “intentionally fabricated by the United States.”

While US officials said it was hard to predict if there would be any dramatic breakthroughs in the talks, they lauded the dialogue as a mechanism for keeping “deep, broad and very resilient” China-US ties on track.

“The US-China relationship is a motion picture, it shouldn’t be looked at as snapshot,” said a second US official.

“It’s sort of that grand epic big Hollywood motion picture in which there’s a lot of actors, a lot of interests at stake, and the trajectory of any particular issue takes time to play out,” the official said.–With a report from Christine O. Avendaño