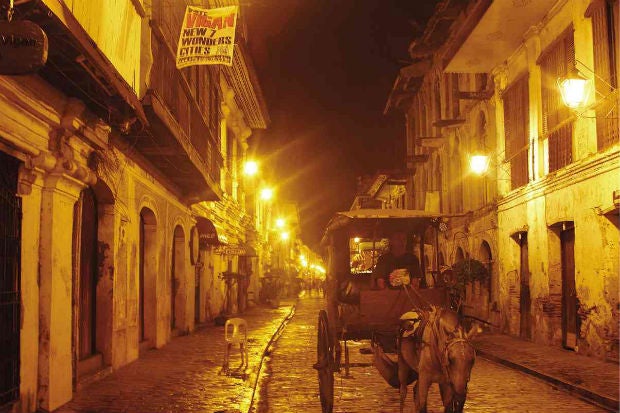 WE’VE ONLY JUST BEGUN Calle Crisologo at night is the face of Vigan City, Ilocos Sur province, in its quest to land on the list of the world’s New 7 Wonder Cities. Vigan has made it to the short list of 21 cities. LEONCIO BALBIN JR./INQUIRER NORTHERN LUZON

VIGAN, Philippines—Residents and netizens in this Ilocos Sur capital woke up to the news that the country’s only heritage city made it to the list of 21 finalists in the new Seven Wonder Cities of the World race.

But they knew that the campaign to push Vigan to the finish line had just started as the fresh round of voting starts on Monday and ends on Oct. 7.

Vigan made it to the penultimate round in the search and needs a further boost over the next three months to advance to the final round of voting.

Organizers of the New7Wonders Cities campaign earlier observed that Vigan, a trading port long before the conquering Spaniards arrived in the late 16th century, had been losing steam but got a second wind in the run-up to the July 7 cut-off.

Vigan City Mayor Eva Marie Medina, who was out of the country when the list was released, sent a text message to city employees thanking Bigueños and Filipinos around the world for helping Vigan’s bid.

Vigan, known for its Spanish-era mansions, cobblestone streets and culture, is the lone Philippine candidate in the global competition initiated by the Swiss nonprofit New7Wonders Foundation. The contest aims to preserve the world’s man-made and natural heritage sites.

The foundation was behind the campaign that named Palawan’s Underground River in Puerto Princesa City as one of the world’s New7Wonders of Nature in 2011.

The United Nations Educational, Scientific and Cultural Organization (Unesco) has placed Vigan in the World Heritage list in 1999, citing the city for its “best practice in sustainable conservation and management of world heritage properties.”

Vigan tourism officer Edgar de la Cruz said the city government is preparing to expand the campaign as it prepares for the next round of voting.

“Vigan will now bring the campaign to a bigger platform. We will make Vigan’s presence felt on the national stage,” he said in a phone interview.

He said campaign materials like tarpaulins will be posted on major roads like Edsa in Metro Manila to generate more support. He said the Metropolitan Manila Development Authority (MMDA) has allowed Vigan to use the MMDA billboards for its campaign.

The Department of Transportation and Communications (DOTC) has also approved the placement of promotional materials in all airports and seaports nationwide, he said.

Vigan has tapped social media networks to promote its campaign. It has also courted the support of private and government media to ask Filipinos around the world to vote for Vigan.

“We are counting on the support of all Filipinos here and around the world,” De la Cruz said.

The New7Wonders Foundation has made available various channels that allow supporters to rally more votes for their bets.

Aside from using the group’s website (www.new7wonders.com), votes may be cast through mobile applications for Apple and Android devices.

Voting may also be done through text messaging as well as dedicated international telephone lines.

“Anyone with a phone—mobile or landline—anywhere in the world, can call one of our dedicated phone lines and vote for their one chosen city,” New7Wonders director Jean-Paul de la Fuente said in a statement.

To vote by phone, callers need to put in a code—after listening to a short message—for the city they are supporting.

The code for Vigan is “28,” mainly because it was last in the alphabetically arranged list of finalists in the previous round.

The roster of 21 finalists will be further reduced to 14 for the final round, which will be announced on Oct. 7. The winning seven cities will be named on Dec. 17.