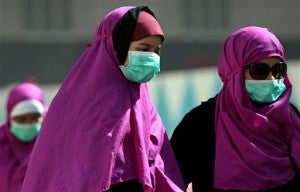 COTABATO CITY, Philippines – As much as possible, no hugs and kisses.

This was the early warning issued by health officials in the Autonomous Region in Muslim Mindanao to some 6,000 pilgrims scheduled for the annual Hajj ritual in Mecca, Saudi Arabia in September, following persistent threat posed by the Middle East Respiratory Syndrome Corona Virus (MERS-CoV).

“There are no signs of eradication and the risk is high as anybody is susceptible to the disease,” said Autonomous Region in Muslim Mindanao Health Secretary Kadil Sinolinding Jr. in reference to the airborne viral ailment.

The latest health advisory serves as precautionary measure after government spotted three MERS-CoV-affected ARMM residents. Sinolinding said two of the patients were from Maguindanao and another was from Marawi City.

“So far up to now, there’s no specific and effective drugs yet for the viral infection as studies are ongoing,” said Sinolinding.

The Mecca pilgrimage is considered the last pillar of Islam on salvation.

“We cannot stop you from pursuing the fifth pillar of Islam, but our concern is precautionary just to guide you to possibly postpone it until the situation improves,” said Sinolinding of the 6,000 registered pilgrims, mostly ARMM residents.

During the traditional hajj, love and forgiveness are shown through embraces and other means physical contact.

“It might not be a hundred percent guarantee against the disease, but will help lessen susceptibility,” Usman said.

A suspected MERS-CoV patient usually complains of breathing difficulty, having fever, cough, and suffering from acute and serious respiratory problem, while others are diagnosed with gastrointestinal symptoms like diarrhea and kidney failure, according to Raki-in.

Sinolinding said the scene of the large gathering of people during the Ramadan month and onward to the Hajj could promote contamination or infection, especially those with weak respiratory glands.

He said a medical team of five physicians and eight medical staff from ARMM would join the pilgrimage to ensure health safeguards, including

the wearing of surgical mask among pilgrims during the ritual.

Millions of pilgrims are expected in the worldwide gathering.

He said the DOH would closely coordinate with the National Commission on Muslim Filipinos, the Department of Foreign Affairs and other agencies of the government to help arrange for the quarantine and the monitoring of arriving pilgrims during the incubation period

No stopping Filipinos from going on hajj