OFW seminars being used to sell financial services to them–Baldoz 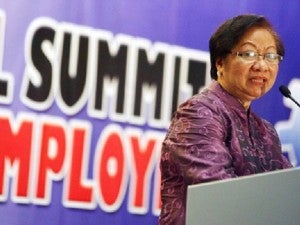 MANILA, Philippines–Instead of focusing on the predeparture orientation seminar (PDOS) they are supposed to give departing overseas Filipino workers (OFWs)—like the cultural do’s and don’ts and health and safety issues in their host countries—some nongovernment providers of the seminar are allowing banks and remittance firms to use the one-day program to market their products and services.

Aside from its 14 regional offices nationwide, the Owwa has accredited some 300 recruitment firms to conduct the seminar.

In a statement, Baldoz said she had “been receiving persistent complaints about some PDOS providers allowing private banks, as well as remittance and insurance companies, to eat up much of the PDOS time to promote their businesses with less and less time devoted to the substantial and more important aspects of what OFWs need to do once they are deployed to their countries of destination.”

Baldoz, also the chair of the Owwa board of trustees, directed Rebecca Calzado, the agency’s newly appointed administrator, to “do a serious review of the PDOS module and its overall content.”

“I want an evaluation report on how PDOS providers are implementing the module and how many are living up to the true intent of the seminar as frontline learning and information providers for OFWs before they are deployed,” Baldoz said.

The Owwa, she said, “should regularly monitor and assess the performance of the PDOS providers, rate them accordingly and withdraw or cancel the registration or accreditation of those allowing the program to be used as some kind of marketing outlet for private businesses.”

“We would like to see a more improved and responsive PDOS, particularly in the quality of instruction and the people who conduct it,” she said.

Baldoz recalled that the Owwa had forged a memorandum of agreement with the Asian Institute of Management on a project to evaluate the effectiveness of the PDOS.

The project, titled “Harnessing the Development of International Migration: An Evaluation of the PDOS for Migrant Workers from the Philippines,” was aimed at raising the migrant workers’ financial and nonmonetary well-being abroad and protect them from exploitation, among other things.

Meanwhile, a study conducted by the Scalabrini Migration Center in the Philippines, the Migration Policy Institute and the Bangkok-based International Organization for Migration’s Regional Office for Asia and the Pacific was also critical of the PDOS.

It noted that the Philippines “has developed a multi-stakeholder predeparture orientation program” implemented by the Owwa, civil society and the private sector.

“The PDOS curriculum has remained largely unchanged over the years, with the exception of the addition of health and safety and financial literacy as topics,” it said. The other topics are “migration realities, (host) country profile, employment contract, travel procedures and tips, and Owwa programs and services.”

According to the study, some nongovernment organizations in the Philippines had “raised concerns about private sector actors in the roles of educators and advocates of migrants’ rights while in the business of recruitment.”

“There have been reports that some agencies do not provide the seminar and just issue certificates. The problem of commercialization raised by Philippine respondents is surfacing in Nepal, where the predeparture orientation program is still in its early years,” it said.

It pointed out that “while the program provided by Owwa is free, nongovernment providers charge approximately $2.30, which is supposed to be shouldered by the (recruitment) agencies.”

“Outsourcing the PDOS to nongovernment providers makes the Owwa’s monitoring of the seminar critical to ensure that the PDOS is implemented properly and effectively,” the report said.