‘Miracle of Kamaishi’: It can happen here for ‘Yolanda’ kids | Global News

‘Miracle of Kamaishi’: It can happen here for ‘Yolanda’ kids 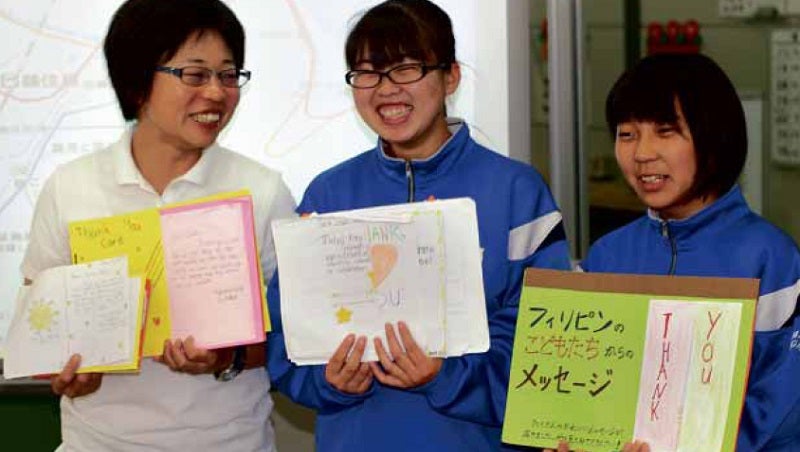 KAMAISHI CITY—Fuka Sato was only 11 when she and some 3,000 other schoolchildren escaped the tsunami that engulfed this small industrial town three years ago in what became known throughout Japan as the “Miracle of Kamaishi.”

But Sato, now a middle-school student at Kamaishi East Junior High, knows that their dramatic escape from the March 3, 2011, disaster—aided by teachers and years of earthquake drills—was not incredible at all.

She believes that the same “miracle” can happen regularly, even in other places. “We need only to share our experience so other children will know what to do,” said 14-year-old Sato.

Which was why when Supertyphoon “Yolanda” (international name: Haiyan) brought devastating storm surges into the coasts of central Philippines last November, the schoolchildren of Kamaishi wanted to reach out that instant.

“They were watching the news and they were reminded of their own experience. Immediately, they wanted to help,” their teacher, Miyoko Hirano, told visiting Southeast Asian journalists, including the Inquirer.

The reporters from Indonesia, Malaysia, Thailand and the Philippines were on a fellowship organized by the Foreign Press Center Japan, which took them on an 11-day tour around the coast of northeastern Japan and the greater Tokyo area to survey the progress of Japan’s massive rehabilitation effort after the triple earthquake-tsunami-nuclear disaster of 2011.

The local media and those involved in the recovery effort now refer to the catastrophe simply as “3/11” after it killed around 20,000 people, left almost 300,000 residents homeless and destroyed nearly

According to Hirano, the Kamaishi schoolchildren, some of whom were still showing signs of trauma from their ordeal three years ago, pooled their lunch money to make a donation to Filipino grade school pupils who survived Yolanda.

The school sent the money to a Philippine nongovernment organization (NGO), which used it to buy school supplies for distribution to elementary school pupils in Palo town, Leyte province, one of the coastal towns ravaged by the storm.

“We know the donation went to the right place because children from the Philippines sent us ‘thank you’ notes,” said Hirano, a cheerful woman in her 30s.

The schoolteacher showed the Inquirer handwritten messages from pupils of Candahug Elementary School, located in one of the villages practically wiped off the map after Yolanda struck.

One letter, written by sixth-grade pupil Airos Bartiles, read: “Thank you for giving us some school supplies. Now I can draw and color again. You guys are helpful, not helpless.”

“Thank you very much to our sponsors and the Japanese children for choosing our school, even you are also victims of tsunami. Thanks for the school supplies you gave us,” sixth-grader Joe Ann Reytomas wrote.

Noraine Daga’s message was short but heartfelt: “Thank you for the generosity. You have hearts that show you aren’t just victims of tsunami. We are blessed.”

Hirano said her school kept the thank-you notes in a special place “because they are precious to us.”

“We got help from donors from all over the world, including the Philippines. We thought we should reciprocate what you did for us,” said Sato.

The Philippines was one of the nations that sent donations to Japan in the immediate aftermath of the 3/11 disaster. The government donated $1 million. Two years later, this kindness was reciprocated by the Japanese when Yolanda struck eastern Visayas.

The Nov. 8, 2013, storm, the strongest ever to make landfall in the world  on record, left more than 6,200 people dead, displaced 3.4 million families from their homes and caused P39 billion in property losses.

Japan and the Philippines are in the Pacific “Ring of Fire,” often visited by earthquakes, volcanic eruptions and other natural calamities.

A 16-year-old Filipino-Japanese volunteer staying in Japan to help instruct Japanese schoolchildren said he was touched by the mutual expressions of support by the two countries, noting that even Japan could use the help.

“It’s not just about money. It’s also about giving emotional support. I go around here instructing kids and helping where I’m needed. I think it’s an enriching experience,” Bilig Sorimachi-Banascan said in a chance meeting with the Inquirer in Nebama, a fishing village near Kamaishi.

Mio Kamitani, an NGO worker based in Otsuchi, another town hit badly by the tsunami, said the government placed one psychiatrist per school district to help schoolchildren deal with trauma.

“And teachers are trained to look out for warning signs of depression. But the bigger problem is the older population… because when a school-age kid is diagnosed to have a problem, usually it’s the mother or father that has the problem,” she added.

According to an official government account, when the 9.0-magnitude earthquake struck northeastern Japan in 2011, Kamaishi, a city in Iwate prefecture with a population of approximately 40,000, was hit by a 15-meter tsunami.

More than 1,000 people were killed or went missing, and nearly a third of the houses were completely or partially destroyed.

“Despite the suffering from this level of damage, almost all of the nearly 3,000 elementary and junior high school students successfully evacuated and stayed safe,” the government said.

“This amazing fact was acclaimed as the ‘Miracle of Kamaishi’ and drew wide-scale response,” it added.

But some quarters have questioned the label.

Yuji Sasaki, director of a fishing association in Nebama, said calling the incident a miracle was a disservice to Japan’s preparedness effort that made it possible for the schoolchildren to flee from the tsunami.

“I would rather that people did not refer to it as the miracle of Kamaishi. It’s not a miracle because it’s the result of continuous evacuation drills. A miracle is beyond our expectations but the success of the Kamaishi schoolchildren is a result of drills,” he said.

“They beautified an actual situation that should and can actually be replicated in other places,” Sasaki said.

He said what happened in Kamaishi was not so miraculous because there were actually a number of schoolchildren who did not make it.

“This is what really happened in Kamaishi,” he said. “When the schoolchildren went to the first evacuation center, some parents came to fetch them and brought them home. They were the ones who died.”

Hirano said that before 3/11, Japanese schools had taught pupils what to do and where and when to go during an emergency.

“We showed them footage of the Sumatra earthquake and tsunami. We also showed them paintings depicting the effects of the earthquake in ancient times in Japan, so they know the seriousness,” she said.

Sato, then a pupil at Unosumai Elementary School, recalled that when the earthquake came, “we all went under the table.” “And then after a while, we went down the building and evacuated to the first floor.”

The children then saw junior high school students running away from the school building and they started to run toward where their upperclassmen were going. “We had teachers with us. They helped us,” she said.

Hirano said the teachers made sure that everyone was out of the building and led the large group of grade school and middle school students to the first evacuation center, the usual site for their disaster drills.

But upon reaching the site, a firefighter told the group that it was no longer safe in that area and asked them to move to another evacuation center further inland.

“At the last leg of our evacuation, the tsunami waves were right behind us, and we just ran and ran. We felt the wind carrying us in, the energy blowing from the wind,” Hirano said. The teachers and students ran a total of 2 kilometers from the school.

“At first they were so calm,” the teacher said of the students. “No one was crying. No one was shouting. But when we reached the second evacuation center and they saw the tsunami waves for the first time, they began to cry.”

“They were very worried about their families,” she said. “All I could tell them was to stop worrying. ‘Bad things happen, but stop worrying.’”

Sato’s classmate, Yukina Kikuchi, gave advice to other schoolchildren who might find themselves in a similar situation: “Don’t look for your family. Just run away. You will find your family later.”

On the first night after the tsunami, it snowed in many of the coastal parts of Japan that were inundated by the deadly natural disaster. The evacuees had little food and water, and relief came only a week later.

“It was so cold,” said the bespectacled Sato. But she never cried or showed her distress. “I felt I should stay strong. I’m not the only victim. I’m not supposed to shout or cry. I’m not in a position to be sad.”

These days, there are few signs of the devastation that struck this town three years ago. The streets are clean, buildings have been built or repaired, roads and bridges have been restored, and shops and restaurants have reopened. But most of these establishments are empty at daytime. The nights are eerily quiet.

Sato said the tsunami was not something she would ever wish to forget, no matter how painful it had been.

“I don’t want to forget because other generations should be told about what happened. Others must know about our experience,” said Sato.

The girl had lost her father to the tsunami.