PH ranks 6-7 on disaster readiness; could do better | Global News

PH ranks 6-7 on disaster readiness; could do better 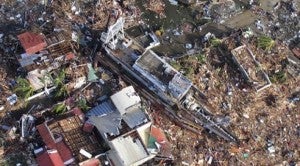 BANGKOK—On a scale of 1 to 10—with 10 being the highest—the Philippines ranks “somewhere between 6 and 7” as far its level of preparedness for natural disasters is concerned.

The assessment was made by Margareta Wahlstrom, UN Secretary General Ban Ki-moon’s special representative for disaster risk reduction, who pointed out the Southeast Asian nation is “very capable” of reducing its vulnerability, as well as responding to calamities.

“On the local government units’ level of preparedness, it’s good. You have outstanding LGUs like (the provinces of) Albay and Cebu. Certainly, they’re between 6 and 7. On the national level, we can also raise it to 6 or 7,” she said.

However, Wahlstrom, also head of the UN International Strategy for Disaster Reduction (UNISDR), asserted that “the Philippines’ aspiration should be higher.”

“It should be an 8 or 9, given that your country has experienced many disasters. Both the national and local levels need to get to 8 or 9,” she told the Inquirer.

Interviewed during the just-concluded 6th Asian Ministerial Conference on Disaster Risk Reduction (AMCDRR), which the UNISDR and the Thai government cohosted from June 23 to 26, Wahlstrom noted that “after Indonesia and Japan, which were hit by earthquakes and tsunamis, Tacloban City (which was devastated by Supertyphoon “Yolanda” in November) is now the face of disaster in the region.”

“There’s the curiosity and interest from other countries and institutions in the region as to why it was different. Some say it was the impression that so many (over 6,000) people died despite an early warning system in the Philippines. Some asked if Tacloban did not heed the warnings unlike other communities like Cebu, and what other factors played in,” she said.

According to Wahlstrom, “the main lesson learned from the Philippine experience with Cyclone Haiyan (Yolanda) is the knowledge that exists in the country that helped many LGUs make full use of their capacities. Credit should also go to your country’s strong legislation which had made budgetary allocations for the same LGUs to strengthen their capacities.”

Aside from LGUs, she said “other sectors of society should also be involved in planning for risk mitigation.”

“The government shouldn’t plan only as a single body. Other sectors should also be encouraged to contribute to the process. This is not necessarily true in every government DNA. But if the trust between the public and private sectors is increased further, I think they can make progress,” she said.

But “the most important recommendation we can give is to always learn from Japan. From every disaster, the Japanese have always looked at what worked well, what didn’t and what needed changing.”

“I hope that’s what your government will also do to make sure they don’t have the same situation again,” she said.

She also expressed the hope that “complacency won’t have a place in postdisaster efforts” by both the public and private sectors in calamity-affected areas in the Philippines.

“After every catastrophe, it takes about 18 months for everyone to forget except, of course, the ones who were directly affected by the disaster,” she said.

Earlier, she cited the Philippines as one of the most disaster-prone countries in Asia that had made “striking paradigm shifts” in disaster risk reduction and management.

Manila is “developing more sophisticated methods of gauging the impact of typhoons following Haiyan,” she said in a statement issued the day before the AMCDRR opened at the Centara Grand hotel here.

Meanwhile, the Philippines was one of 49 countries which adopted the “Bangkok Declaration,” issued during the closing program of the four-day AMCDRR, which aimed to “shape future efforts to build more resilient communities in the region.”

The agreement calls for, among other things, increased funding for disaster risk reduction projects, transparency in the accounting of disaster relief funds; and strengthening the role of local governments and business groups, as well as other sectors like women, children and persons with disabilities, in DRR planning and management.

Cohosted by the UNISDR and the Thai government, the conference reviewed the implementation of the 10-year Kyogo Framework of Action on Disaster Risk Reduction, adopted in Kobe, Japan, in 2005 by more than 160 countries, including the Philippines.