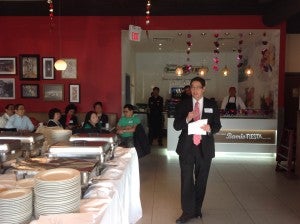 TORONTO, Canada –Flush from winning a majority in Ontario’s provincial elections on June 12, the federal Liberal Party has begun lining up potential candidates for national elections in 2015. Here in Toronto, Filipino Canadian Rafael Fabregas wants to be part of the Liberals’ return to power.

On June 24, Fabregas is seeking the Liberal Party of Canada’s nomination to run for Member of Parliament for the riding of Scarborough Centre, a bellwether riding.  This is a crucial riding, as the term bellwether indicates:  every member of Parliament who won a seat in this riding belonged to what became the ruling government party.

Scarborough Centre could well be the litmus test for Rafael Fabregas and the federal liberals in 2015.

Next year’s federal elections should be an exciting one. After the battering they suffered at the 2011 polls that propelled the Progressive Conservatives to power under Stephen Harper, the federal Liberals seem to be enjoying a resurgence in popularity, fed mainly by Justin Trudeau’s charismatic personality.

The eldest son of Pierre Trudeau, a former prime minister of Canada, has taken up the baton of leadership for the federal Liberals and is certainly giving jaded political pundits reason to sit up and take notice.

The Liberals are parlaying the Trudeau mystique to shore up their ranks and their position in public opinion polls, spotlighting the virtues of youth, earnest idealism and populist policies in a society faced with unemployment and political scandals.

At first glance Rafael Fabregas seems to be a walking contradiction — he is both a Bay Street lawyer and a relentless community advocate.  But he certainly fits the Liberals’ bill — young, earnest and a champion for the marginalized. 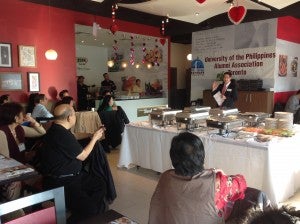 residents.  This is now law, known as “Juana Tejada’s Law.”

Fabregas has made citizenship and immigration issues his specialty and has appeared before the House of Commons’ Standing Committee on Citizenship and Immigration to discuss the plight of temporary foreign workers in Canada. His academic life was devoted to his passion — advocating for those unseen, unheard and ignored in the community.

While a student at Osgood Hall Law School, he founded the Immigration Law Society and received the Prize in Immigration Law (2005).  He worked at Parkdale Community Legal Clinic, which opened his eyes to the plight of many Filipinos in the area.  For his community advocacy work, the Federation of Asian-Canadian Lawyers gave him the “Lawyer of Distinction” award in 2008.

Fabregas was born in Davao City, the third child of Angel Roco Fabregas of Naga City, Camarines Sur and Cristina Rodriguez Fleming of Manila.  He went to De La Salle-Zobel School in Alabang for his elementary and secondary education. After high school he attended the University of the Philippines in Los Banos for three years before leaving for Canada.

Fabregas obtained a Bachelor’s Degree in English Literature from the University of Toronto and went to Osgood Hall Law School at York University for his Bachelor of Laws degree.  He was called to the Ontario Bar in 2006 and now works for Egan LLP as a lawyer and manager of the firm’s Canadian immigration team.

He is married to Monique Santos, his classmate and childhood friend from De La Salle-Zobel.  They have three children–Talia, and twins Koen and Garon.