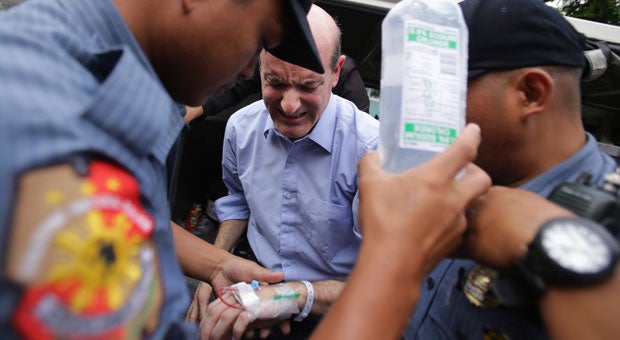 Italian diplomat Daniele Bosio, center, whose lawyers said he is suffering from kidney problems, grimaces as he arrives to attend his arraignment at the City Prosecutor’s office at Biñan, Laguna province, on Wednesday, June 18, 2014. The judge has canceled the arraignment after his lawyers requested for a review of their petition submitted at the Department of Justice. AP PHOTO/AARON FAVila

MANILA, Philippines–An Italian diplomat detained in the Philippines on child abuse charges insisted he was innocent and applied for bail on Wednesday, as he appeared before a court in deteriorating health.

With an arm attached to an intravenous drip, Daniele Bosio, 46, stumbled as he walked out of a heavily guarded police van and into court in Biñan town, Laguna province, about two hours’ drive south of Manila.

The judge, Theodore Solis, suspended the intended arraignment session after Bosio’s lawyers appealed his indictment and asked for a bail hearing.

“We asked for the reversal of the ruling of the prosecutor [because] he was deprived of due process,” his lawyer, Romeo Lumagui, told reporters outside the court.

“He insists that he did nothing wrong, he did not violate any law,” he said.

Bosio, who was then Italy’s ambassador to Turkmenistan, was on holiday when arrested in April after a children’s advocacy group told police they saw him acting inappropriately with three boys at a water fun park near Manila.

The boys, aged 9 to 12, issued sworn statements to government social workers that Bosio had “fondled their sex organs” before he took them to the park, according to the prosecutor’s complaint.

Those charges carry jail terms of between six years and life.

Baybay, in his findings, rejected Bosio’s argument that he was only being compassionate by taking the children to have fun at the water park.

He said allegations by the children against Bosio deserved a serious investigation.

Bosio had previously denied acting inappropriately with the boys and said he had taken the boys to the park as part of his longtime mission to help underprivileged children.

The administrator of a Filipino school has also said Bosio was an important benefactor who had helped students for many years.

Italy’s foreign ministry suspended him shortly after he was arrested.

Bosio’s younger brother, Andreas, said on Wednesday the diplomat had become increasingly weak since his detention, after initially being kept in a tiny cell no larger than a garage, which he shared with about 80 other inmates.