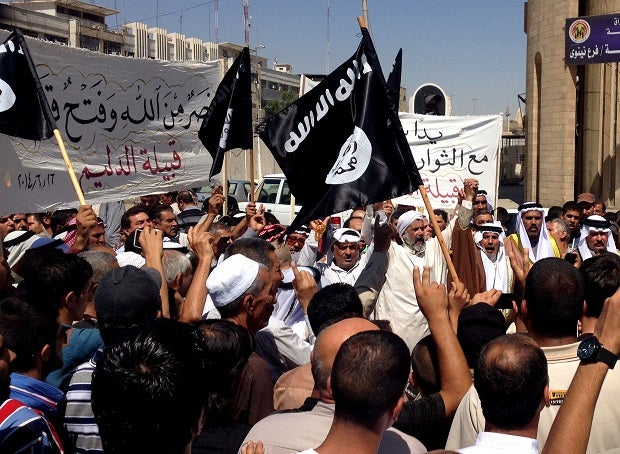 In this Monday, June 16, 2014 file photo, Demonstrators chant pro-al-Qaida-inspired Islamic State of Iraq and the Levant (ISIL) as they wave al-Qaida flags in front of the provincial government headquarters in Mosul, 225 miles (360 kilometers) northwest of Baghdad, Iraq. In the week since it captured Iraqs second-largest city, Mosul, a Muslim extremist group has tried to win over residents and has stopped short of widely enforcing its strict brand of Islamic law, residents say. Churches remain unharmed and street cleaners are back at work. AP

MANILA, Philippines—The Philippines is assessing the situation in Iraq to look at the possibility of raising the crisis alert level to four, the highest, which entails mandatory repatriation of Filipinos there.

“Give us five days because we are looking at it very closely,” Department of Foreign Affairs (DFA) secretary Albert del Rosario said in an interview with reporters late Tuesday.

“We told ourselves we have to review the crisis level (in Iraq),” he said.

DFA previously raised crisis alert level 3 in the country due to the insurgency that has been growing out of control and threatening the capital city of Baghdad.

The rebel group, led by Islamic State in Iraq and the Levant (ISIL), has made significant advances on towns around Baghdad, alarming the United States which deployed 275 soldiers to protect the US Embassy.

The majority of the 900 Filipinos in Iraq are located in the autonomous region of Kurdistan in the northern region of the country.

“We have about 900 [Filipinos in Iraq] most of them in Kurdistan and we want to make sure we have a mapping of people outside Kurdistan,” del Rosario said.

DFA has deployed a rapid response team to Iraq Monday to ensure the safety and security of Filipinos.

DFA deploys team in Iraq to speed up repatriation of Filipinos

OFW ban, evacuation from Iraq on