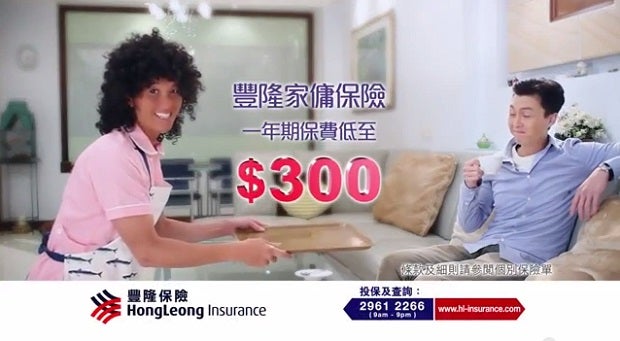 HONG KONG — A “racist” insurance commercial depicting a male Chinese actor as a Filipina maid has drawn outrage on social media in Hong Kong, with groups representing the city’s legions of domestic helpers calling for an apology.

Aimed at the employers of Hong Kong’s 300,000 maids, who mainly hail from the Philippines and Indonesia, the domestic helper insurance advert for Malaysia’s Hong Leong Bank shows the Chinese actor wearing dark orange make-up and a curly wig as he plays clumsy maid “Maria.”

Hong Leong did not immediately respond to requests for comment, but the bank appeared to have removed the link to the advertisement from its website on Wednesday.

“I think they should make a public apology,” Eni Lestari, spokeswoman for the Asian Migrants’ Coordinating Body, told AFP, describing the ad as “very racist.”

“You are making comedy out of someone, out of a community,” she said. “For (Hong Kong residents) it’s funny, but what they don’t realize is what’s funny is actually racist.”

She questioned why the bank did not hire someone from Indonesia or the Philippines to play the maid.

“You guys should really take down that ad and apologize for it… It’s really not appropriate for a professional representation of your financial services,” Kahlil Stultz wrote on the bank’s Facebook page.

“Why do you have to solidify the omnipresent racial and cultural stereotypes that are hurting so many people?” added Marcin Rutecki.

The row comes weeks after separate controversy over a Hong Kong school textbook, which critics said encouraged children to racially stereotype their neighbors.

The book asked children to match nationalities to the “appropriate” job description — such as Indonesian for domestic helpers, or Japanese for sushi restaurant owners.

The case of Indonesian maid Erwiana Sulistyaningsih, who allegedly endured a months-long torture campaign by her Hong Kong boss, has put a spotlight on the working conditions faced by the financial hub’s domestic workers.

Her employer, a 44-year-old mother-of-two, is on trial and last week denied all the charges against her.

Amnesty International last year condemned the “slavery-like” conditions faced by some of the city’s domestic helpers and accused authorities of “inexcusable” inaction.