Pope to see many positive developments in ‘Yolanda’ rehab–Lacson 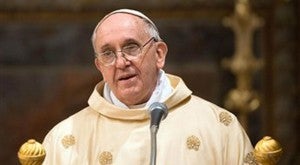 MANILA, Philippines–If Pope Francis’ visit to towns ravaged by Super Typhoon Yolanda (Haiyan) would push through in 2015, may he not only stop over in Tacloban but also in other areas where there have been many success stories amid recovery and rehabilitation, said Presidential Assistant on Rehabilitation Panfilo Lacson.

In a church forum on Tuesday, Lacson said he could not ensure a complete and total recovery by the time of the papal visit in January next year but there were already many good things that Pope Francis could witness in the “Yolanda corridor,” referring to the 171 cities and towns affected by the typhoon.

So far, only 25 percent of the rehabilitation works that should be done in areas wiped out by Yolanda–the strongest typhoon to hit land in the country’s history–have been completed, said Lacson.

“If the pope will go to places ravaged by the typhoon, I hope he does not only visit Tacloban. He could also go to places where there are many success and human-interest stories happening while rehabilitation is underway,” Lacson said at the forum hosted by the Catholic Media Network on Tuesday.

Among these places worth a visit is Tanauan in the province of Leyte, where a school is being constructed courtesy of two young Filipino-American children from Berkeley, California, who managed to raise $100,000 to help survivors of the typhoon, said Lacson.

In another area in the “Yolanda corridor,” he also heard the story of a family who returned P3,000 worth of financial assistance because the money given to them was more than the amount they should receive.

“We, Filipinos, should be proud that in the middle of suffering, there are people who are still honest and have high integrity,” he added.

But Lacson said the government–both national and local–would make the necessary preparations once the details of the papal visit have been released.

“There will be a massive infusion of resources the moment the president approves the rehabilitation plans in these areas…[Pope Francis] will see a different level [of improvement] depending on the date of his visit,” said Lacson.

Last month, Pope Francis announced his plan to visit the Philippines in January next year after his visit in Sri Lanka.