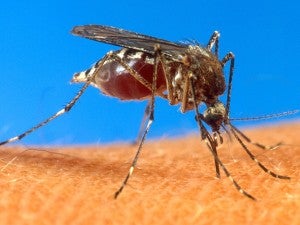 In this undated file photo provided by the USDA, an aedes aegypti mosquito is shown on human skin. AP FILE PHOTO

CLARK FREEPORT, Philippines—A key to reducing dengue fever cases is controlling the reproduction of mosquitoes that cause the disease, according to a World Health Organization (WHO) official who participated in the Association of Southeast Asian Nations (Asean) conference on dengue here last week.

Epidemiologist Lasse Vestergaard, WHO medical officer and member of the Danish Society for Tropical Medicine and International Health, said controlling the primary dengue vector, the Aedes aegypti, along with other dengue-causing mosquitoes like the Aedes albopictus, should be undertaken by health agencies in line with WHO’s Global Strategy for Dengue Prevention and Control 2012-2020.

The strategy, which seeks to reduce the burden of dengue by reducing deaths by 50 percent and dengue cases by 25 percent by 2020, lists sustainable control of the dengue-causing mosquitoes.

WHO’s paper on its strategy against dengue cited the evolution of the Aedes aegypti and Aedes albopictus to resist insecticides. This, according to WHO, makes monitoring their resistance important “to ensure that effective insecticides are being used and that changes in insecticide policy are based on sound scientific data” that should be coordinated at the local level.

The other elements of the strategy are diagnosis and case management; integrated surveillance and outbreak preparedness; future vaccine implementation; and basic, operational and implementation research.

It stressed the importance of laboratory confirmation of dengue virus infection, as dengue could be confused with other viral and parasitic diseases, such as malaria and chikungunya and zika viruses, if assessment was made by clinical signs and symptoms only.

In the Philippines, while government and private hospitals determine the severity of cases by classifying it as either dengue fever or the sometimes fatal dengue hemorrhagic fever, only the Research Institute for Tropical Medicine (RITM) of the Department of Health verifies the serotype (microorganism category) of the viruses involved.

Dengue, which has four serotypes, infects 50 to 100 million people all over the world each year, according to WHO.

WHO described dengue as a “neglected tropical disease” that has grown 30 times in the last 50 years. Two-thirds of the global population exposed to dengue are in the Asia Pacific region.

It said that in the 1960s, only nine countries had experienced severe dengue epidemics. Now the disease is endemic to more than 100 countries in Asia, South America and Africa and is spreading to North America and Europe. Last year, dengue cases were recorded in Florida in the United States and in Yunnan province in China.